After President Donald Trump tweeted that he would be announcing the “Most Dishonest and Corrupt Media Awards” on Jan. 8, a few top late-night hosts decided to submit themselves for consideration for the year.

“I will be announcing THE MOST DISHONEST & CORRUPT MEDIA AWARDS OF THE YEAR on Monday at 5:00 o’clock,” Trump wrote on Jan. 2. “Subjects will cover Dishonesty & Bad Reporting in various categories from the Fake News Media. Stay tuned!”

Trump later changed the date of the ceremony to Wednesday, Jan. 17. “The Fake News Awards, those going to the most corrupt & biased of the Mainstream Media, will be presented to the losers on Wednesday, January 17th, rather than this coming Monday,” he tweeted on Jan. 7. “The interest in, and importance of, these awards is far greater than anyone could have anticipated!”

But that didn’t stop Stephen Colbert, Jimmy Kimmel and Trevor Noah from taking time out of their shows to mull over their chances of receiving one of the awards — or as Colbert referred to them, “the Fakies.”

Here’s how the hosts are preparing for the night.

After sharing his excitement at the prospect of winning an award, the host of The Late Show revealed that he had purchased a billboard in New York’s City Times Square in hopes of increasing his chances of being honored in categories such as “Least Bretibarty,” “The Eric Trump Memorial Award for Disappointment” and “Smallest Button.”

“Personally, I’m excited for the most Dishonest and Corrupt Media Awards of the year,” he said. “Because nothing gives you more credibility than Donald Trump calling you a liar. And I, of course, don’t want to get snubbed.”

Apparently late-night minds think alike. Not to be outdone by Colbert, Noah not only purchased a billboard in Times Square but took out a full-page ad in the New York Times promoting The Daily Show as “political propaganda disguised as entertainment” and “monotonous…liberal dogma.”

“After provoking North Korea and then insulting Palestine, the President turned to America’s greatest foe: the fake-news media,” Noah said of Trump’s announcement. “So that was Donald Trump’s day on Twitter. The bad news is he’s itching to start a nuclear war. The good news is, despite his threats to Korea, at least he thinks we’re going to make it until Monday.”

Meanwhile, Kimmel was feeling a bit less confident than his peers and apparently trying to keep everyone’s hopes at bay. The Live! host expressed doubt that anyone in the media would actually receive an award.

“The President of the United States is starting his own awards show — the Stupid People’s Choice Awards are what they’re calling it,” Kimmel said. “This is a real dilemma for the President because, on one hand, he loves awards and trophies. But will he be physically able to give a trophy to someone other than himself? I don’t think so.”

With just one day to go until the supposed new date of the Fake News Awards, Colbert presented a full history of “Even Fakier Awards” that Trump has bestowed on himself, including “The Greatest Jobs President That God Ever Created,” “The Least Racist Person You Have Ever Interviewed” and “Knows Words, Has the Best Words.” 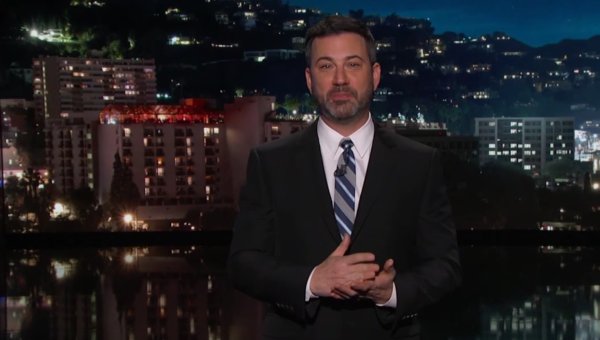 Jimmy Kimmel Has Some Advice for the President About That New Book Claiming the White House Is Dysfunctional
Next Up: Editor's Pick