Winter Storm Grayson, the blizzard that’s creating dangerous travel conditions along the East Coast, has caused airlines and airports to consider flight cancellations this week. Leaving a trail of snow from Florida up to New England, which will see historic winter weather, the “bomb cyclone” has affected flight statuses for travelers departing from, heading to, and even just passing through Atlantic coast airports.

Worried about your flight? Here’s the current status of the major East Coast airports, updated regularly. And if you’re wondering how Grayson is messing with travel in general, look at FlightAware’s “Misery Map”, which can tell you exactly which airports are feeling burned by Winter 2018’s first big snowstorm.

A blizzard couldn’t come at a worse time for Hartsfield Jackson International Airport, which was crippled by a power outage in mid-December and is trying to find its stride in 2018. A major hub billed as the world’s busiest airport, Hatsfield Jackson knows how to handle ice and snow, but it can’t control the conditions at the airports where its planes land or take off from.

The airport has made no announcements regarding the winter weather, so your best bet for confirming your travel is to look at the airport’s flight information overview.

The latest update from Baltimore/Washington International, via the airport’s Twitter account is that their “snow team continues working this morning to keep the airfield clear for airline operations.” as of Thursday afternoon. However, the account also retweeted this message from Southwest Airlines on Wednesday, so expect delays:

Approximately 700 flights have been cancelled at Logan International Airport, including flights from American, JetBlue and United. Boston knows how to run a snowplow, but with more than a foot of snow and the highest tide in 40 years flooding the city’s streets, this storm is hitting harder than the Olde Towne can handle. Massport Director of Aviation Ed Freni told WBZ-TV that travelers should avoid the airport at this time (though technically it is open). “Coming to Logan is not going to help,” he added.

For more details, check your flight status before your car hits the Ted Williams Tunnel, or you may get stuck.

The weather is starting to impact flights coming into and leaving Charlotte Douglas International Airport. Flight View provides a good 3,000-foot view of the airports comings-and-goings, which includes many delayed and canceled departures.

The airport’s flight information page directs travelers to the airlines for more information, and that’s good advice — you can find the carriers’ phone numbers if you click through to the link. The airport has posted an encouraging visual to its Twitter account:

South Carolina’s Columbia Metropolitan Airport is sitting outside of Winter Storm Grayson’s path, which might help travelers looking to use the runways here. Primarily serviced by American, Delta and United, the airport isn’t currently listing any delays or cancellations. But the best place to look — other than the airlines’ websites — is the airport’s flight information page.

Northern Florida isn’t used to snow, which may be why Winter Storm Grayson has thrown Jacksonville International Airport for a bit of a loop. On Tuesday, airlines including Southwest and American got ahead of the weather announcing cancellations. Currently the airport’s flight information page is showing a mix of canceled and on-time flights. On Wednesday, the airport it would have “normal operations” via Twitter, but the fact is it cannot control the conditions at other airports, so flights departing Jacksonville are seeing cancellations and delays:

Delays and cancellations are plaguing flights to and from Miami International Airport — mostly on trips that are going up or down the East Coast. Otherwise flights seem to be operating as usual from the busy international airport, especially if you’re flying someplace warm. But heed the airport’s warning tweet below. To know for sure if your flight has hit a hiccup, plug your travel information into the airport’s real-time flight tracker.

The storm is officially hammering John F. Kennedy International Airport, which has announced the temporary suspension of all flights until Friday at 7 a.m.

The best way to get the status for a flight in the busy New York City hub is to contact the airline directly. Here is a list of all the JFK airlines, along with their phone numbers.

LaGuardia Airport is succumbing to the storm. A temporary suspension of all flights was announced Thursday afternoon, but has been eased by Thursday evening. For up-to-date information on specific flights, FlightAware has all of LaGuardia’s delays and cancellations.

Similar to LaGuardia and JFK, Newark Liberty International Airport is currently getting pounded by the storm. The airport hasn’t announced an official update since yesterday when it got ahead of the weather by announcing via Twitter that more than 70% of its flights have been canceled. According to FlightAware, it’s the airport that’s been hardest hit by the storm, with 509 cancelled departures today alone.

This isn’t the first snow storm to hit Philadelphia International Airport, and it won’t be the last. Currently, the airport is working hard to get flights off the ground, but there’s been more than 440 cancellations so far. According to its latest tweet, 50 flights have been cancelled for Friday.

Pittsburgh International Airport is currently seeing a mix of delays, cancelations, and on-time flights, but that may not be entirely related to Winter Storm Grayson. Steel City can shrug off snow with the best of them, but this airport isn’t particularly active on social media. But it did recently post this update to its Twitter account:

The plows were gassed and ready at Raleigh-Durham International Airport last night, and that might have made a difference. This morning the airport posted an optimistic update:

Still, Raleigh-Durham’s plows can’t clear New York’s runways. So, if you’re flying out of North Carolina, check your flight status before you unload your bags at the terminal.

They are feeling the pinch of the winter weather at Richmond International Airport in anticipation of snowy and icy weather Thursday. The most recent Tweet from the airport was posted on Wednesday, but it looks like just around 25% of its flights are cancelled or delayed. As Thursday evening settles in, the airport is already looking ahead to Friday’s flights:

If you’re flying into or out of Richmond, a smart travel tip is looking up your airline information before you roll your luggage out the door. The airport has also announced it has started cancelling some Friday flights.

There’s a mix of on-time, delayed, and cancelled flights on the board at Tampa International Airport, which is seeing most of its delays based upon the availability of planes come into land from snow-struck locations.

For the most up-to-date information in Tampa, search for your flight on the airport’s flight status page.

Operations are currently normal at Dulles International Airport, though there are approximately 85 cancellations because of Winter Storm Grayson, a count that is up from what the airport officially announced this morning:

Lacking for any better information, you should go to the airport’s arrival and departure status page and plug in your flight’s information.

The word at Ronald Reagan National Airport is similar to the news out of Dulles:

To find out if yours is one of the flights effected, plug in your travel information at the airport’s flight status page. 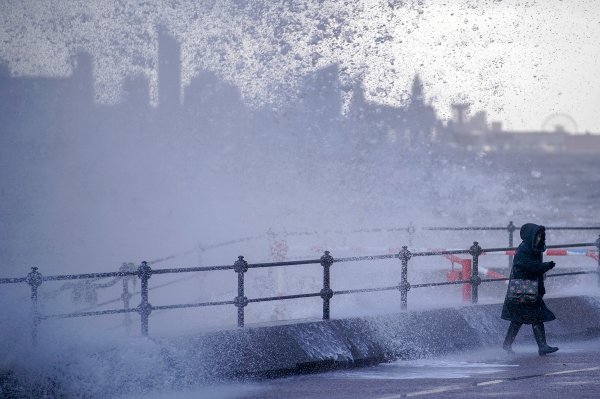 Winter Storm Leaves at Least 3 Dead in Europe
Next Up: Editor's Pick