President Trump may not actually have a “nuclear button,” but he does have a button that can instantly affect people all over the world: It’s a small oval in an app on his phone that says simply “Tweet.”

When Trump tweeted Tuesday night that he had a “much bigger and more powerful” nuke button than North Korean leader Kim Jong Un, it showed that he can launch a metaphorical missile whose political fallout would be far-ranging.

For now, the nuclear button tweet was disturbing, but mostly a dud — simply more fodder for the president’s critics and a helpful prompt for the writers’ room for late-night talk shows coming off a long holiday break.

After all, this is a president who previously called Kim “Rocket Man” in an aside while addressing the United Nations, threatened to “totally destroy” the country in the same speech and offhandedly said that if North Korea makes any more threats to the U.S. “they will be met with fire and fury like the world has never seen.”

This tweet seemed like just more of the same over-the-top war of words that Trump and Kim have long engaged in.

Still, the White House views the president’s tweets as “official statements,” as does the Justice Department, several judges who have ruled against Trump and the Kremlin. And it came just days after former Joint Chiefs of Staff Chairman Mike Mullen said that “we’re actually closer … to a nuclear war with North Korea and in that region than we have ever been.”

It’s unclear what the exact process is for Trump’s tweets as of 2018, but in the past White House officials have said that they do not review the president’s tweets before they go out, and the New York Times reported in December that he often tweets while watching cable news from the White House’s master bedroom.

Trump loves to feud with his critics, especially on Twitter, and he’s turned that sparring into part of his Administration’s foreign policy. While Tuesday’s nuke button tweet was relatively harmless, it was a reminder that a future tweet might not be. The public is concerned too. In a September poll by NBC and the Wall Street Journal, two thirds of respondents said they disapproved of the president’s use of Twitter, making it the most unpopular action he’d taken.

Even Trump seems to know this.

In April of 2016, he said that if he was elected president he’d deactivate his nuclear Twitter button.

“Don’t worry, I’ll give it up after I’m president,” he said. “We won’t tweet anymore. I don’t know. Not presidential.” 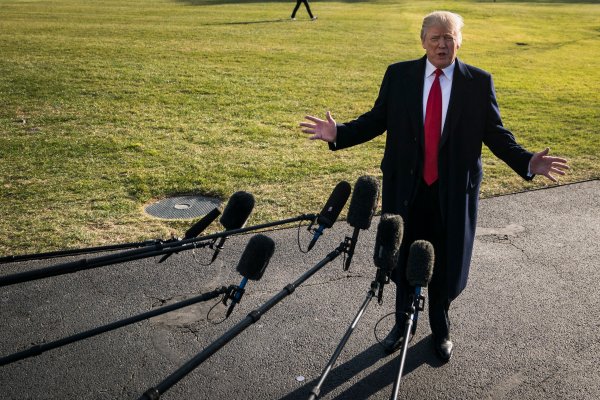 President Trump Made Nearly 2,000 Untrue Claims in 2017
Next Up: Editor's Pick