Over the past eight months, Jimmy Kimmel has emerged as a prevalent political voice in the late-night world.

It all began when Kimmel opened the May 1 episode of Jimmy Kimmel Live! by recounting the birth of his son, William “Billy” Kimmel, who was born with a congenital heart defect and underwent open heart surgery at just three days old. Kimmel explained that this experience had opened his eyes to the heartbreak facing families who couldn’t afford to pay for their child’s medical care. Since then, Kimmel has become an ardent advocate for universal health care coverage.

He has also used his show as a platform to speak out on other issues, including gun control and the controversies surrounding the Alabama Special Election.

Here’s your comprehenensive guide to all the times Jimmy Kimmel has gotten political.

Kimmel opened his first show after the April birth of his second child with wife Molly McNearney by tearfully revealing that their newborn son Billy had to have open heart surgery at just three days old due to a congenital heart defect. He then delivered an emotional plea for universal health care coverage that quickly went viral, garnering support from prominent Democratic political figures such as Barack Obama and Hillary Clinton, as well as a number of celebrities.

“If your baby is going to die and it doesn’t have to, it shouldn’t matter how much money you make,” he said. “I think that’s something that whether you’re a Republican or a Democrat or something else, we all agree on that, right?”

Kimmel’s next major foray into the national health care debate came amidst a September push by Senate Republicans to vote on the Graham-Cassidy bill, a proposal co-sponsored by Senators Lindsey Graham and Bill Cassidy that would have repealed major chunks of Obamacare had it passed. The late night host called out Sen. Cassidy for saying he would only support a bill if it ensured no child would be denied medical care because their family couldn’t afford it—a standard Cassidy had dubbed the Jimmy Kimmel Test during a May appearance on Live!

“This new bill actually does pass the Jimmy Kimmel Test — but a different Jimmy Kimmel Test,” Kimmel explained. “With this one, your child with a preexisting condition will get the care he needs if and only if his father is Jimmy Kimmel. Otherwise you might be screwed.”

After Sen. Cassidy brushed Kimmel’s criticism aside by saying that he was sorry Kimmel didn’t understand the bill, the Live! host fired back with a list of health organizations that were also opposed to the legislation, including the American Medical Association, American Hospital Association and American Cancer Society.

“I don’t want to turn this into a Kanye-and-Taylor-Swift-type situation, but when Senator Cassidy was on my show in May, he told me that he believed that every American family regardless of income should be able to get quality health care. And I believed he was sincere. Sadly, the bill he unveiled last week with Senator Lindsey Graham indicates that he was not sincere. It is by many accounts the worst health care bill yet.”

On the third night of Kimmel’s campaign against Graham-Cassidy, the late night pundit came out swinging at President Donald Trump, who had tweeted that he wouldn’t sign the “great bill” if it didn’t include coverage for pre-existing conditions.

“For Donald Trump, this isn’t about the Graham-Cassidy bill. It’s about getting rid of Obamacare, which he hates, primarily because Obama’s name is on it. He likes to have his name on things,” Kimmel said. “He’d sign Qurans at the Barnes and Noble in Fallujah if it meant he could get rid of Obamacare.”

Following the Las Vegas shooting—the deadliest mass shooting in modern U.S. history—Kimmel was brought to tears on the Live! stage discussing the tragedy that had occurred in his hometown. He dedicated that night’s opening monologue to calling for gun control, or as he refered to it, “common sense.”

“What I’m talking about tonight isn’t about gun control; it’s about common sense,” Kimmel said. “Common sense says no good will ever come from allowing a person to have weapons that can take down 527 Americans at a concert. Common sense says you don’t let those who suffer from mental illness buy guns.”

Leading up to the Alabama Special Election, Republican Senate candidate Roy Moore started a Twitter war with Kimmel by challenging the late night host to confront him “man-to-man” after Tony Barbieri—a comedian who has appeared on Live! under the stage name Jake Byrd—disrupted an event at an Alabama church where Moore was speaking.

The feud then escalated when Kimmel not only tweeted a jab at Moore’s “Christian values” but responded to the summons on his show that night.

“I happen to be a Christian too. And I will share what I learned at my church: at my church, forcing yourself on underage girls is a no-no,” he said, referencing the allegations of sexual misconduct Moore is facing from multiple women who say they were teenagers at the time. “Some even consider it to be a sin.”

Kimmel’s crusade against Moore continued right up to the day of the Special Election, when he took a preemptive victory lap celebrating Moore’s defeat.

“I don’t know the results yet, the polls just closed, but I do know Roy Moore shouldn’t even be in the race,” he said. “And I’m not talking about the Senate race, I mean the human race.” 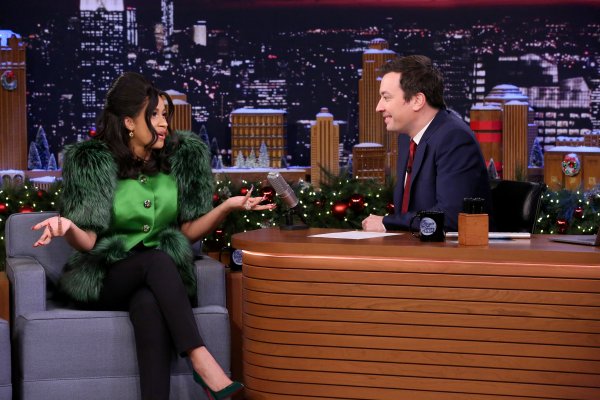 Jimmy Fallon Knows He's Not Worthy to Be in Cardi B's Presence
Next Up: Editor's Pick