‘Those Families Are Changed Forever.’ A Deadly Year in Fraternity Hazing Comes to a Close

University campuses across the country were rocked by a series of fraternity deaths in 2017, fueling an unprecedented national conversation about the dangers of fraternity culture and what can be done to keep students safe.

“In 40 years, this is the biggest blowback that I’ve seen,” said Hank Nuwer, a professor at Franklin College in Indiana who has researched hazing for decades and keeps a record of hazing incidents.

The backlash against Greek life has fueled calls to abolish fraternities altogether, along with demands that students involved in hazing deaths face more serious charges. After Penn State sophomore Tim Piazza died while pledging a fraternity in February, Centre County District Attorney Stacy Parks Miller sought charges as severe as involuntary manslaughter and aggravated assault, but hazing cases usually result in more minor charges, if any are brought at all.

Walter Kimbrough, the president of Dillard University in New Orleans who has written about Greek life and served as an expert witness in several hazing cases, thinks serious charges are necessary.

“When people talk about hazing, it’s still sort of viewed as a boys-being-boys activity,” he said, adding that the pattern of recent deaths suggests a more “radical” response is warranted because students’ behavior hasn’t changed. “So let’s not talk about hazing. Call it what it is — murder, manslaughter, assault and battery,” he said.

While universities have often suspended Greek life following a student death, this year several schools — including Ohio State and the University of Michigan — decided to temporarily halt fraternity activities because of hazing and alcohol violations.

“It’s like everybody’s calling a timeout to say, ‘We don’t know what to do right now, so let’s take a break and think about this again.’ I think we’re all scratching our heads to figure out how do we stop this behavior,” said Kimbrough, who allows fraternities to operate at Dillard and said there have been no notable problems on his campus recently. “I think this fall was a little different because you’ve seen more places acknowledge that they don’t know what to do about this, putting a halt to all activities. I’ve never seen that before,” he said.

Still, the problem continues to vex universities and concern families who hoped more would change after their child died.

“All of these deaths occurred before Thanksgiving, so think for a second what their [families’] Thanksgiving was like,” he said. “I know what it was like in my household. It’s been three years and nine months and a day since Marquise died. Thanksgivings kind of suck. All the holidays suck.”

“Those families are changed forever,” he added. “There’s going to be an empty seat at their dinner table for the rest of their lives. Because of foolish stupidness like hazing.”

These are the four students whose alleged hazing deaths drove the conversation about fraternity reform this year:

Evelyn and Jim Piazza with a photo of their son Tim, who died in February after a fraternity hazing ritual at Penn State University
Photograph by Mark Hartman for TIME

Piazza died in February after an alleged hazing ritual called “the gauntlet,” in which he was forced to consume 18 drinks in less than 90 minutes, according to surveillance video. He later sustained traumatic injuries in a head-first fall down a set of stairs.

A total of 27 defendants — 26 fraternity members and the Beta Theta Pi chapter — are now facing charges in the death of the 19-year-old sophomore who was pledging the fraternity, which has since been banned by the university.

Piazza’s parent have called on Penn State to do more to prevent future hazing cases and criticized the “hollow excuses” of defense attorneys, who have argued that Piazza’s death was a tragic accident and have fought for the most serious charges to be dismissed.

A grand jury report released last week by Parks Miller, the DA, accused Penn State of turning a blind eye to drinking culture and fraternity misconduct in the past. Penn State rolled out a set of reforms in the wake of Piazza’s death, ending the system of Greek self-governance and postponing the recruitment process for freshmen.

“Penn State strongly disagrees with many characterizations of the University and our record of action as presented by the District Attorney, but we remain deeply committed to turning the pain and anguish of this tragedy into reforms that continue to improve the safety and well-being of our students,” Penn State President Eric Barron said in a statement on Friday.

“Tim will not be with us this coming Christmas day because of the failures at Penn State and the criminal activity of those charged,” his parents, Jim and Evelyn, said in a statement last week. “We hope that he can be the catalyst for change not only at Penn State but throughout the country.”

Maxwell Gruver died in September after being found unresponsive at the Phi Delta Theta house, where he had participated in a ritual called “Bible Study” in which pledges were forced to drink if they answered questions about the fraternity incorrectly, the Associated Press reported, citing court filings.

An autopsy found his blood alcohol level was .495 at the time of his death.

Gruver’s mother has characterized his death as murder. “Nobody can physically drink that much, you can’t. You have to be forced to drink it,” Rae Ann Gruver said in an interview with ABC News last week.

“It’s senseless,” she said. “I mean, how is making your brother do all these things, and humiliating somebody, a brotherhood?”

Ten suspects, including eight students currently enrolled at LSU, were arrested on charges of hazing in October. One of the suspects also faces a charge of negligent homicide.

“You just wish it wouldn’t be your own grandson, but it happened. Max was so handsome and talented. And he had a lot to look forward to. We all love him so much,” his grandfather, Eugene Gruver, told TIME in September. “I will be grieving the rest of my life.”

Andrew Coffey, a junior pledging Pi Kappa Phi, died in November after an off-campus fraternity party at Florida State University, where he passed out after drinking a bottle of Wild Turkey bourbon during a “big brother” ritual. Autopsy results showed he had a blood alcohol level of .447.

Coffey’s parents said he had planned to enlist in the Navy, describing him as “smart and handsome as the day is long with a personality and smile that would light up a room.”

“Even as we are heartbroken, we are also troubled. Troubled that our son died alone in a room full of people,” his parents wrote in a statement this week. “Troubled that no one stood up and said ‘stop,’ ‘no,’ ‘enough.’ Troubled that a group of young people saw someone in crisis and didn’t act. And troubled that this continues to happen, again and again.”

Fraternity members and university administrators testified this week before a grand jury, which recommended that the state attorney pursue criminal charges in Coffey’s death once the police investigation is completed.

Florida State University has also suspended Greek life indefinitely in the wake of his death.

Matthew Ellis, a sophomore who was pledging the Phi Kappa Psi fraternity, was found unresponsive by friends on Nov. 13 after an off-campus party at Texas State. He had been at an initiation for his fraternity, the University Star reported.

San Marcos Police Chief Chase Stapp told the Austin American-Statesman last month that criminal charges were “pretty likely,” adding that it was too early in the ongoing investigation to know for sure if such charges were warranted. A preliminary investigation indicated that alcohol might have been a factor in Ellis’ death, police said.

“People remember Matthew for his infectious smile, his great personality,” Pastor Scott Dornbush, of Kingwood United Methodist Church, said at Ellis’ funeral service. “Everyone who met him loved him.” 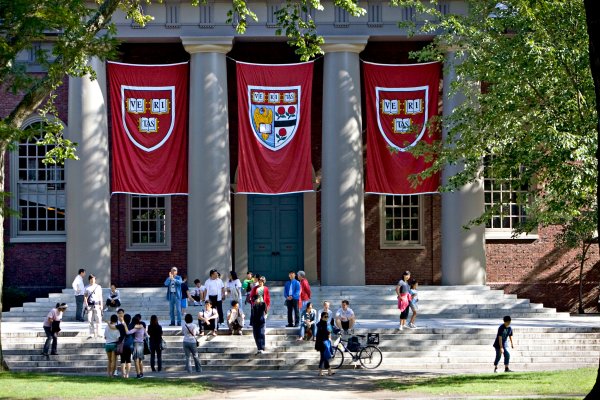 'All the Hard Work Was Worth It.' Watch This 16-Year-Old Lose It After Learning He Got In to Harvard
Next Up: Editor's Pick