Actor Danny Nucci may not have been the star of Titanic, but as Leonardo DiCaprio‘s best friend Fabrizio in the blockbuster James Cameron film, his face lives on as Jack Dawson’s sidekick in many iconic scenes. Nucci — who currently plays Mike on TV show The Fosters — decided to discuss recently with Cosmopolitan, sharing some illuminating behind the scenes stories of his six months filming the legendary romance.

As explained by Nucci, the experience shooting the infamous “king of the world” scene was less than comfortable. “We couldn’t have any coats or anything, so we just had our costumes and it was freezing,” he said, noting that they were lifted up with a hydraulic ladder. “It was a big deal to take us down, so when they reset the cameras [to shoot] it from all angles, Leo and I were stuck up there having to pee… we couldn’t pee, we couldn’t eat, we were starving, and we were frigging miserable and cold. The minute they called “action” was the greatest moment of our lives and then we would just be miserable again. This went on for hours.”

Besides being cold a lot of the time (and, luckily, having access to hot tubs to help warm up), the film used a setup rather like dorms to house the actors between takes. And since director James Cameron had an erratic shooting schedule, that meant there was plenty of downtime for actors.

“Leo and I would play video games for hours,” Nuzzi noted. “It was fun. We made the most of it.”

And then there were the weekly cast parties: “Sunday morning at 7 a.m. is when the party started on Titanic, because that’s when we were done [filming],” Nucci said. “I didn’t realize how much British people drank. Woo! Holy cow. I mean they can party.” 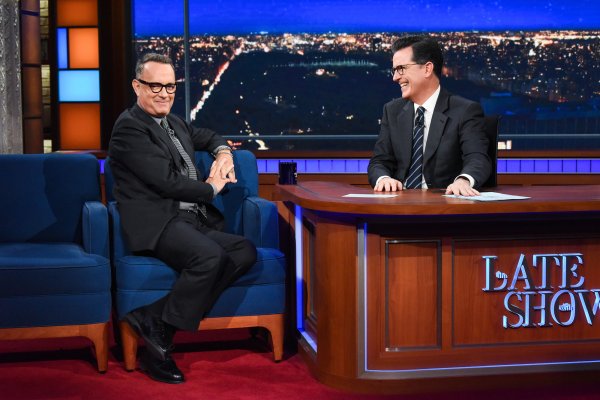 It's Time to Watch Tom Hanks Tell Stephen Colbert About the Good Old Days
Next Up: Editor's Pick