Al Franken Resigns From the Senate Amid Sexual Misconduct Allegations

In an emotional speech on the Senate floor on Thursday morning, Sen. Al Franken of Minnesota said he will resign in the “coming weeks” amid mounting allegations of sexual misconduct, though he stopped short of accepting culpability for the alleged behavior.

“I know in my heart that nothing have done as a senator — nothing — has brought dishonor on this institution and I am confident that the Ethics Committee would agree,” he said. “Nevertheless today I am announcing that in the coming weeks I will be resigning as a member of the United States Senate.”

Franken’s decision came after growing pressure from his Democratic colleagues in the Senate, which reached a crescendo on Wednesday, after a former staffer — the seventh woman to raise allegations against Franken — accused him of forcibly kissing her eleven years ago.

By Wednesday evening, 35 Senate Democrats had called on Franken to resign.

“I consider Senator Franken a dear friend and greatly respect his accomplishments, but he has a higher obligation to his constituents and the Senate, and he should step down immediately,” Senate Minority Leader Chuck Schumer said in a statement.

After arriving at the Capitol holding his wife’s hand, Franken, a former “Saturday Night Live” comedian who has reinvented himself as a Democratic celebrity since coming to the Senate in 2009, argued that not all of the allegations about him are true. He also took the opportunity to criticize President Trump and Alabama Senate candidate Roy Moore over allegations of sexual misconduct against them.

“I of all people am aware that there is some irony in the fact that I am leaving while a man who has bragged on tape about his history of sexual assault sits in the Oval Office and a man who has repeatedly preyed on young girls campaigns for the Senate with the full support of his party,” he said. “But this decision is not about me. It’s about the people of Minnesota.”

Franken is the second congressional Democrat to resign in the face of sexual assault allegations this year. The first, Rep. John Conyers of Michigan, announced on Tuesday that he’d be stepping down.

The wave of allegations against Franken began on Nov. 16, when Leeann Tweeden, a Los Angeles radio host, wrote that on a USO tour in Afghanistan in 2006, Franken attempted to aggressively kiss her under the pretense of rehearsing for a comedy skit. Later, on a military flight out of the country, he groped her breasts while she was sleeping — an act that was photographed.

Since then, seven more women have charged that has Franken behaved inappropriately towards them in the past. After weeks of dodging the issue, congressional Democrats galvanized this week to call for Franken’s resignation.

“I believe it would be better for our country if he sent a clear message that any kind of mistreatment of women in our society isn’t acceptable by stepping aside to let someone else serve,” Sen. Kirsten Gillibrand of New York said in a Facebook post Wednesday morning.

Franken’s speech on the Senate floor did not amount to a confession of guilt. “Some of the allegations against me are simply not true,” he said. “Others I remember very differently.”

He did not give a hard deadline for his departure from the Senate, nor did he specify who his replacement would be, but referred to that person in his speech as “she.”

Following Franken’s speech, many of his Democratic colleagues appeared somber and were reluctant to remark on his resignation. “I don’t want to comment, thank you,” Sen. Angus King, an independent from Maine who caucuses with the Democrats, said.

Franken left the Capitol as he’d arrived less than an hour earlier: hand-in-hand with his wife, Franni Bryson, and smiling. A mob of reporters engulfed him as he made his way to his car. He largely declined to answer questions, but one broadcast reporter from his home state asked him if he had any words for his fellow Minnesotans. 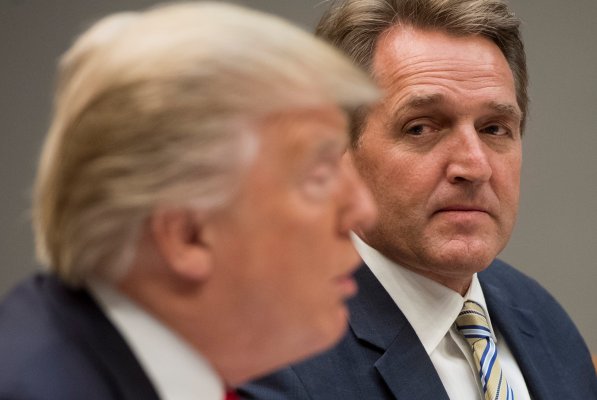 Sen. Jeff Flake Defends His 'Yes' Vote on the Republican Tax Bill
Next Up: Editor's Pick