TIME announced its choice for 2017 Person of the Year on Wednesday as the Silence Breakers, a broadly representative group that includes the people around the world who have powered the #MeToo movement and others who have spoken out about sexual harassment and assault, to fuel a reckoning about the treatment of women, particularly in the workplace.

As TIME wrote in the cover story, “this reckoning appears to have sprung up overnight. But it has actually been simmering for years, decades, centuries.” From feminist movements in the 1960s and 1970s, to the women who bravely called out Bill Cosby several years ago, to Gretchen Carlson, one of the most vocal Roger Ailes accusers, to the women’s marchers, to the 223 national security experts who recently signed an open letter about their experiences, this moment has been long building.

Here’s a look back at some of the sexual harassment and related coverage from just the past few years:

Last month, more than 200 U.S. national security experts signed an open letter — first reported by TIME’s Maya Rhodan — saying they had been victims of sexual harassment or assault. “This is not just a problem in Hollywood, Silicon Valley, newsrooms or Congress,” they wrote.

As the wave of allegations against Hollywood producer Harvey Weinstein began to break in October, TIME put the story on the cover.

“In a better world than the one we live in, any performer coerced in this way–made to feel that her career hinged on her sexual compliance at the hands of a powerful bully–would feel free enough to speak up,” Stephanie Zacharek wrote in that issue. “But until shockingly recently, the outcome of doing so was entirely predictable: a woman who spoke up risked losing standing in her profession, or at the very least being labeled a whiner who didn’t know how to play the game. And the man in power would lose nothing. If anything, he’d just grow more powerful.”

The accusations against Weinstein set off a still-growing list of allegations against other male leaders in Hollywood, media, business and politics.

“In the rubble of Weinstein’s empire, we find artifacts divulging so much about our values, our culture and ourselves,” writer and lawyer Jill Filipovic wrote in TIME. “The story they tell is one of stunning hypocrisy and of the slow grind of earth shifting beneath us.”

The day after Donald Trump’s inauguration, hundreds of thousands of women — and men — marched in Washington D.C. and in all 50 states to protest Trump’s election and the treatment of women more broadly. They seized on Trump’s boasts about groping women without their consent and wore pussy hats that quickly became the iconic symbol of their movement.

In 2016, former Fox News anchor Gretchen Carlson filed a lawsuit alleging that she was fired from her job for rejecting the sexual advances of Roger Ailes, who was then chairman and CEO of Fox News. The lawsuit fueled more accusations and led to Ailes’ ousting.

“I think this is happening every single day to women in all walks of life and in all different types of corporations,” Carlson told TIME in October 2016. “I’ve heard from so many women, from Wall Street to a tiny little town in Alabama. It’s everywhere.”

As Katie Couric wrote in her entry for Carlson’s inclusion in the TIME 100, “Speaking truth to power is never easy. It’s even harder when the whole country is watching.”

Carlson’s suit shed light on the common use of arbitration clauses in employment contracts — something that can prevent employees from speaking out publicly about sexual harassment. Carlson has since advocated for the the Fairness in Arbitration Act, which aims to enable Americans to hold large corporations accountable for wrongdoing in court.

Allegations of sexual assault against comedian Bill Cosby resurfaced in 2014 and 2015, when dozens more women came forward with new accusations.

He appeared in court in June, on trial for three felony counts of “aggravated indecent assault” after allegedly drugging and molesting former Temple University basketball staffer Andrea Constand at his home in 2004

Accusers expressed hope, even after the case ended in a mistrial. “We can never underestimate the blinding power of celebrity,” said Gloria Allred, an attorney who represents several women who have accused Cosby of assault. “But justice will come.” 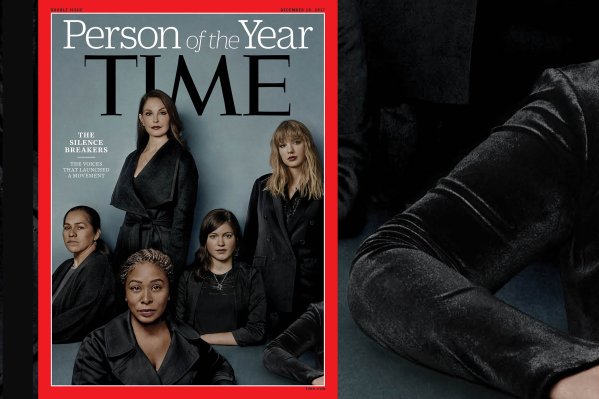 The Story Behind the Woman You Don’t See on TIME’s Person of the Year Cover
Next Up: Editor's Pick