'A Stain on the GOP.' Mitt Romney Takes a Lonely Stand Against Roy Moore

By Alana Abramson and Laignee Barron

President Donald Trump’s endorsement of Republican Senate hopeful Roy Moore has emboldened support for the embattled candidate by some within the GOP — but not all.

Former Massachusetts Governor and 2012 GOP presidential nominee Mitt Romney took to Twitter late Monday to distance himself, and his party, from the former Alabama judge who faces several allegations of sexual misconduct.

Moore, who denies the allegations viewed by senior members of his party as “credible,” has to date been accused of sexual misconduct by eight women. Among the allegations are several accounts by women that he made sexual advances toward them while they were teenagers, and he was in his 30s.

Since the Washington Post broke the story, several other women have accused Moore of preying on teenage girls when he was an adult. According to the New Yorker, one Alabama shopping mall even banned the former chief justice of the Alabama Supreme Court for serially harassing teen girls.

As the allegations against Moore mounted, many prominent Republicans called for him to exit the race. Senate Majority Leader Mitch McConnell said in November that Moore should step aside if guilty. Asked whether he believed the allegations were true, McConnell replied: “I believe the women, yes.”

The Republican National Convention initially withdrew funding and support for Moore as GOP heavyweights continued to abandon his corner. In light of Trump’s endorsement, however, the organization has reversed its position and decided to once again back the disgraced candidate, a senior RNC official confirmed to TIME in an email.

The sudden about-face follows reports in late November that both the RNC and the National Republican Senatorial Committee had no plans to change their position on the candidate.

A multitude of other Republicans have either withdrawn their support or directly spoken out against Moore in the weeks preceding the president’s endorsement, including House Speaker Paul Ryan, Senators Bill Cassidy, Steve Daines, Cory Gardner and Mike Lee. Senators Bob Corker and Susan Collins were among those calling for Moore to step down. At time of writing, none of the above have publicly responded to the president’s endorsement.

Write to Alana Abramson at Alana.Abramson@time.com and Laignee Barron at Laignee.Barron@time.com. 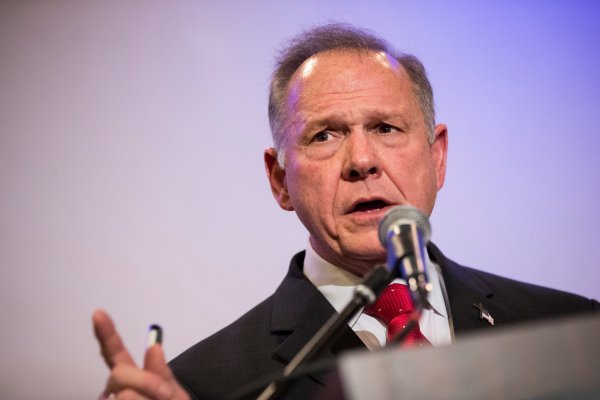