When President Trump visited Utah on Monday, he subtly undermined Mitt Romney in the latest chapter of their tortured relationship.

The pool reporters traveling with Trump asked him if he was encouraging Utah Sen. Orrin Hatch, also on the trip, to run for reelection. “Yes,” Trump responded.

There has been buzz that former Massachusetts governor would run for Hatch’s Senate seat if the 83 year old decides to retire after his seventh term. Citing five unnamed sources, The Atlantic reported recently that “Senator Orrin Hatch has privately told allies in Utah that he is planning to retire at the end of his term next year, and if he does, Mitt Romney intends to run for his seat.”

Asked in Utah if he is trying to send a signal that he doesn’t want Romney to run for the seat, Trump paused and said, “He’s a good man, Mitt’s a good man,” according to the pool report.

Though Romney successfully sought Trump’s endorsement in his 2012 run, their relationship has been contentious since the 2016 election, when Trump called Romney a “choke artist” for losing the 2012 election and Romney gave a speech calling Trump a “phony” and a “fraud.”

After Trump won, he publicly courted Romney for secretary of state, before offering the gig to Rex Tillerson instead. Romney later revealed that he “would’ve accepted the job.” More recently, Romney wrote a passionate criticism of Trump’s response to the riots in Charlottesville, calling it a “defining moment” for the presidency. 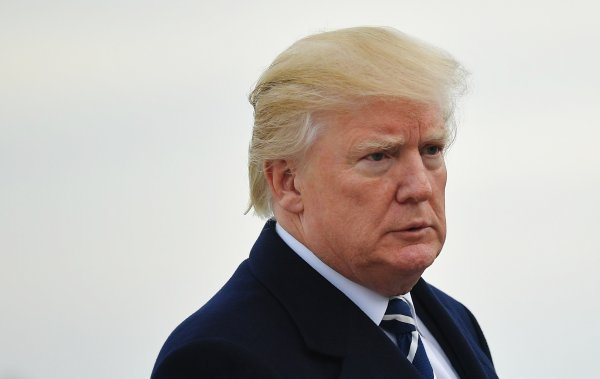 Can the President Be Charged With Obstruction of Justice?
Next Up: Editor's Pick