The Alabama Special Election Race Between Roy Moore and Doug Jones Will Be Over Soon. Here's What to Know

The highly anticipated Alabama Senate special election race will conclude on Dec. 12, when voters will decide whether Republican Roy Moore or Democrat Doug Jones will fill the seat left vacant by Attorney General Jeff Sessions. The special Senate race was largely seen as Moore’s to lose after the primary, when the former judge defeated Sen. Luther Strange despite him being backed by establishment Republicans and President Donald Trump.

But the Alabama special election has tightened in recent weeks as nearly a dozen women have accused Moore of sexual misconduct. Many saw the allegations against Moore as a boost for former prosecutor Jones, and some national Democrats have stumped for Jones ahead of the tight race in ruby-red Alabama. After stumping for Strange, President Trump switched his support to Moore.

While Moore has maintained Trump’s support throughout the race, his backing seemed to be jeopardized by accusations that Moore had sexually molested at least one teenage girl when he was in his 30s. On Dec. 4, Trump signaled that he was all-in for Moore, tweeting that the Congress needed his vote on key issues like tax reform. In the days before the race, he also held a rally and recorded a robocall for the candidate.

“Democrats refusal to give even one vote for massive Tax Cuts is why we need Republican Roy Moore to win in Alabama,” the tweet read. “We need his vote on stopping crime, illegal immigration, Border Wall, Military, Pro Life, V.A., Judges 2nd Amendment and more. No to Jones, a Pelosi/Schumer Puppet!”

Here’s everything else you need to know about the upcoming Special Election.

The Special Election is scheduled for Dec. 12. There were reports that Republicans were trying to delay the Special Election when women kept coming forward to accuse Moore of sexual misconduct, but Alabama Gov. Kay Ivey shut that idea down pretty quickly. Ivey has said she will support Moore in the election, even though she said in November that she had “no reason to disbelieve” Moore’s accusers. The governor said at the time that she felt Republicans needed to win in order to secure votes for Supreme Court justices and judicial nominees.

A former state supreme court justice who has twice been removed from the bench, Moore has been a controversial figure from the start. He is best known for defying federal orders to issue marriage licenses to same-sex couples and to remove a Ten Commandments monument from a state judicial building. He has also made inflammatory comments about gays and Muslims; after Rep. Keith Ellison, a Democrat from Minnesota, was elected in 2006, Moore wrote an op-ed saying he should not be allowed to serve because of his faith. He has recently been accused of sexually molesting at one teenage girl, sexually assaulting another, and attempting to initiate romantic relationships and sexual encounters with other teens when he was in his thirties. Moore has denied those allegations, but they’ve become a focal point of his race against Jones.

Though he did not travel to Alabama for Moore ahead of Election Day, President Trump held a rally near the state’s border in Pensacola, Fla. on Dec. 9 at which he urged the crowd to vote for the Republican. “Get out and vote for Roy Moore. Do it. Do it,” he said. “We cannot afford, the future of this country cannot afford to lose the seat.” President Donald Trump also recorded a robocall for the candidate.

Jones is a former federal prosecutor known for bringing, and winning, a case against former members of the Ku Klux Klan that were involved in the 1963 bombing of a Birmingham church. Four African American girls died in that bombing, which occurred at the height of the Civil Rights movement. Interest in Jones has grown in the wake of the allegations against Moore — at least one poll has shown them neck-in-neck in recent weeks, but the candidate faces an uphill battle. Jones’ stance on abortion has been a problem in the race because at the end of the day Alabama is a conservative state.

National Democrats, New Jersey Sen. Cory Booker who traveled to Birmingham, Ala., stumped for Jones just ahead of the election. According to Politico, President Barack Obama and Vice President Joe Biden would also record separate robocalls in support of Jones.

In late November, a retired Marine colonel named Lee Busby announced he was launching a write-in campaign in the Alabama Special Election race. In an interview with TIME, he said: “Both of the candidates have committed bases but those bases are at the far left flank and the far right flank and I think there is a vast number in the middle that are tired of the divisiveness int he country and will take that option if they’re given the option and thats all I’m doing.”

Alabama Special Election polls have been mixed from the beginning, but a recent CBS News poll found that 49% of likely voters support Moore in the race compared to 43% who support Jones. The poll found that little over half of likely voters, 52%, said that the allegations against Moore are concerning, but other issues in the race matter more, though the poll did not specifically ask about which issues trumped this one. The poll did find that more respondents tended to believe immigrants make American society “worse in the long run” and that same-sex marriage should not be legal. The overwhelming majority also think that the media or Democrats are behind Moore’s accusations, according to the survey.

A recent Washington Post-Schar School poll of likely voters finds 50% support Jones, while 47% back Moore. The poll has a margin of error of plus or minus 4.5 percentage points. But a Real Clear Politics average of the race has Moore leading by 2.6 percentage points as of Dec. 4.

On Dec. 11, just one day before voters are to hit the polls, a pair of conflicting surveys show both candidates with large leads in the race. An Emerson College poll of 600 likely voters showed Moore beating Jones by 9-points, his biggest gain in weeks. On the other hand, a Fox News poll released on Dec. 11 had Jones trumping Moore by 10-points. The Fox survey of likely voters had a margin of error of three percentage points.

But pollsters have warned against reading too far into the numbers in this Special Election race, even in the wake of the scandals. As Politico reported, few surveys have been conducted since the news of Moore’s allegations broke, most of the polling firms are little-known, and few national outlets have stepped in to survey the landscape. “The most important and closely watched election in the nation is taking place in the equivalent of a polling black box,” Politico noted. 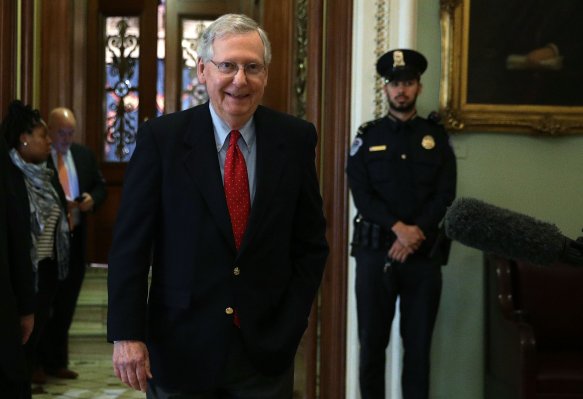 How Republicans Overcame Their Doubts on Tax Reform
Next Up: Editor's Pick