In this Nov. 16, 2015 photo provided by ABC, correspondent Brian Ross speaks on "Good Morning America," which airs on the ABC Television Network, in New York.
Fred Lee—AP
By Katie Reilly

President Trump on Sunday celebrated the suspension of ABC News reporter Brian Ross, who incorrectly reported that Michael Flynn would testify that Trump had instructed him to make contact with Russian officials during the presidential campaign.

Flynn, Trump’s former national security adviser, pleaded guilty on Friday for lying to the FBI, as part of special counsel Robert Mueller’s investigation into possible collusion between the Trump campaign and Russian operatives who meddled in the 2016 presidential election.

It was later reported that Trump’s son-in-law, Jared Kushner, was the one who told Flynn to contact Russian officials.

“People who lost money when the Stock Market went down 350 points based on the False and Dishonest reporting of Brian Ross of @ABC News (he has been suspended), should consider hiring a lawyer and suing ABC for the damages this bad reporting has caused – many millions of dollars!” Trump said in a tweet on Sunday.

Ross, the network’s chief investigative correspondent, was suspended on Saturday for four weeks without pay.

“We deeply regret and apologize for the serious error we made yesterday,” ABC News said in a statement. “The reporting conveyed by Brian Ross during the special report had not been fully vetted through our editorial standards process.”

“Congratulations to @ABC News for suspending Brian Ross for his horrendously inaccurate and dishonest report on the Russia, Russia, Russia Witch Hunt. More Networks and “papers” should do the same with their Fake News!” he said in a tweet. 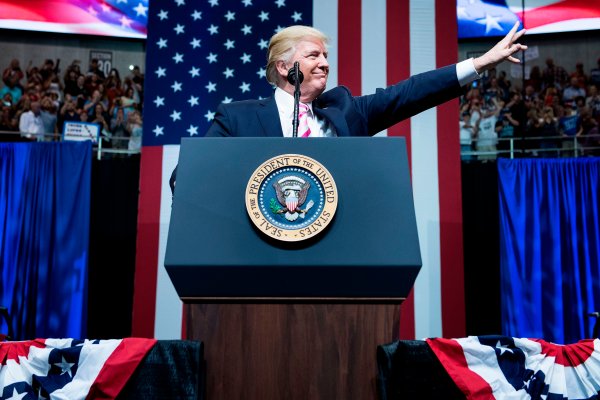 President Trump Will Hold a Rally Near Alabama Just Before the Special Senate Election
Next Up: Editor's Pick