By Philip Elliott and Elizabeth Dias

President Donald Trump announced Wednesday that the United States recognizes Jerusalem as the capital of Israel and will put into motion plans that will relocate the American Embassy to that ancient city.

“Today we finally acknowledge the obvious: that Jerusalem is Israel’s capital,” Trump said, flanked by Christmas trees at the White House. “This is nothing more or less than a recognition of realty. It is also the right thing to do.”

The announcement breaks with decades of U.S. diplomacy that sought to keep questions of the capital in the mix as part of peace talks between Israelis and Palestinians, who also see Jerusalem as their capital city. The President’s decision, described by two senior administration officials on Tuesday, seems to end the United States’ interest in playing a neutral peace broker and places Washington firmly on the side of Israelis.

“Delaying the recognition of Jerusalem as the capital of Israel has done nothing to achieve peace,” one senior administration official told reporters on the condition of anonymity so as not to pre-empt the President’s announcement.

While the recognition of Jerusalem as Israel’s capital will be immediate, the questions of the U.S. embassy will not. On Wednesday Trump announced he’s directing the State Department to begin the process of moving the United States’ diplomatic headquarters from Tel Aviv into Jerusalem. “This will be a matter of some years,” a second senior U.S. official said. “It won’t be months. It won’t be quick.”

The speed is less of an issue than the site for Muslim and Arab leaders, with whom Trump spoke earlier Tuesday.

In a statement from its Embassy in Washington, Jordan said King Abdullah II “warned of pre-empting a comprehensive solution that leads to the establishment of a Palestinian state, with East Jerusalem as its capital. His Majesty emphasized that Jerusalem is key to achieving peace and stability in the region and the world.” The Jordanians said Trump told Abdullah of “his desire to move the United States embassy from Tel Aviv to Jerusalem.”

Concurrently, the Palestinians say Trump told Mahmoud Abbas that the U.S. Embassy would be moving to Jerusalem despite Palestinian hopes to use the city as their capital. Abbas, too, warned Trump of possible repercussions.

The risks don’t seem to be a consideration for the U.S. Administration. “I’m not sure President Trump understands what this means,” says a former U.S. diplomat to Israel.

At the White House, spokeswoman Sarah Huckabee Sanders dismissed criticism from Muslim and Arab leaders whom the President phoned advance of the announcement. “He spoke with five leaders. That’s hardly indicative of everybody across the globe,” Huckabee Sanders said.

This is the latest indication that the United States’ efforts to seek a durable solution to the negotiations that have consumed foreign policy in the region for half a century are entering a new phase. Trump in effect said the United States is not interested in having a brokering role in the future. Administration officials rejected that interpretation. “He very strongly reiterated his absolute commitment to the united states facilitating a peace deal between the Israelis and the Palestinians and his belief that such a deal is within reach,” the second U.S. official told reporters.

“The United States remains deeply committed to helping facilitate a peace agreement that is acceptable to both sides,” Trump said Wednesday, placing strong emphasis on the words “both sides.”

But Presidents of both parties have sought peace in the Middle East, thus prompting them to delay compliance with a 1995 U.S. law that required the Embassy be moved to Jerusalem. Arab and Muslim leaders have urged delay, too, saying the shift signals the United States is not serious about providing a separate nation of Palestine.

The first U.S. official said the Trump Administration’s move would have no impact on the talks. “He is not taking a decision that affects any of the boundaries of sovereignty. Those issues will have to be discussed during permanent status negotiations,” the official said. Even so, headlines across the globe expressed foreign leaders’ dismay. Few Arab or Muslim leaders came to Trump’s defense.

It’s worth adding a caveat: If there are further negotiations. Muslim and Arab leaders warned the White House that Trump was lighting a match and playing with a short fuse if it is seen as closing the door for a Palestinian capital in Jerusalem. The pending announcement has left Middle East watchers on edge, given how reverberations could spark protests among Arabs and Muslims, imperil Israelis’ safety and perhaps set in motion repercussions in the dicey proxy wars playing out in places like Lebanon, Saudi Arabia, Yemen and Iran. U.S. forces in the region stepped up their posture and diplomatic outposts warned Americans about potential violence.

Even so, Trump’s team vowed to move forward on an announcement that Vice President Mike Pence has been laying the groundwork for. In a speech in New York last week, Pence said the decision to move the Embassy was a priority for Trump and Pence aides said the vice president’s statement was not an accident. “For the past 20 years, Congress and successive administrations have expressed a willingness to move our Embassy, as we speak, President Donald Trump is actively considering when and how to move the American embassy in Israel from Tel Aviv to Jerusalem,” Pence said.

Pence, one of the most prominent Christians in the country, plans to visit Israel in December. He announced plans to visit the region last month at a dinner for a group that advocates for Christians in the Middle East. He also announced that Trump had decided to move funding for persecuted religious minorities from the U.N. to faith-based and nonprofit organizations through the U.S. Agency for International Development. And he stood behind Trump at Wednesday’s announcement.

The Jerusalem Embassy Act of 1995 requires the president to sign a waiver every six months to keep the U.S. embassy in Tel Aviv and not move it to Jerusalem. Every president since the law was enacted has opted to keep the embassy in Tel Aviv, citing national security interests. But last Friday’s deadline came and went without action from Trump. Administration officials say Trump will sign the waiver.

“Presidents issued these waivers under the belief that delaying the recognition of Jerusalem would advance the cause of peace. Some say they lacked courage, but they made their best judgments based on facts as they understood them at the time,” Trump said. “It would be folly to assume that repeating the exact same formula would now produce a different or better result.”

The potential move is unlikely to be helpful for the broader goal of bringing peace to the region. By keeping the U.S. Embassy in Tel Aviv, the thinking went inside administrations from both parties, it allowed Jerusalem’s control to be part of peace negotiations. The U.S. decision to locate its Israeli diplomatic base in Jerusalem would all but declare the city would be Israel’s to control in any two-state resolution — and perhaps makes a deal between Israelis and Palestinians all the more difficult to strike.

Trump promised to move the embassy to Jerusalem during his presidential campaign. The promise was critical to his support among white evangelicals, who also celebrated Trump’s promises to defund Planned Parenthood and nominate a conservative justice to the Supreme Court.

Since his inauguration, conservative Christian leaders have pressed Trump to move the embassy. In May, dozens of social conservatives affiliated with the American Christian Leaders for Israel signed a letter urging him to not sign the waiver. When Trump signed it, they remained optimistic. They sent another letter days before the deadline for the second waiver.

The move came days after Trump shared a string of three anti-Muslim videos on Twitter from a far-right activist from England. The White House said that the videos, which purport to show Muslims behaving violently, started a conversation even if they were not authentic. The British Prime Minister said Trump was wrong to have shared them in the first place. White House aides said the authenticity and veracity were inconsequential.

Trump is approaching the end of his first year in office and, especially lately, has been sensitive about how much remains on his to-do list. Movement on the Middle East is a victory he can tout, although it’s not clear that the decision has any immediate impact on Americans. With a tax package under consideration in Congress, a government funding deadline approaching next week and North Korea again rattling its sabers, the diplomatic address is one of the few things on the President’s agenda firmly under his control.

Past presidents from both parties, including Bill Clinton and George W. Bush, have said they would move the Embassy to Jerusalem but they have balked. U.S. and international advisers have warned the Presidents that the relocation could endanger any future peace talks, especially if it is seen as boxing the Palestinians out of Jerusalem, a city central to the people of Jewish, Christian and Muslim backgrounds and their histories.

The U.S. Ambassador to Israel, David Friedman, has told interviewers that it is a question of when, not if, the Embassy will move. That, coupled with his at-time-dismissive rhetoric about Palestinian concerns, has prompted some observers to question if the United States would continue to push for a peace deal in the region. A White House deputy press secretary, Hogan Gidley, told reporters on Monday something similar on Air Force One: “The President has been clear on this issue from the get-go that it’s not a matter of if but a matter of when. No action will be taken on the waiver today and we will share a decision on the waiver in the coming days.”

White House senior adviser Jared Kushner, who is the President’s son-in-law, has been pushing hard to restart peace talks in the region. Kushner, who is close to Prime Minister Bibi Netanyahu, has visited the region several times with other White House aides to lay the groundwork for talks between Israelis and Palestinians. He, too, is viewed suspiciously by the Palestinians even though he has been a voice against moving the Embassy because of its fraught politics.

In effect handing Jerusalem to Israel, Trump is signaling that the city’s fate will not be part of negotiations and the Palestinians will have to look elsewhere for their state, in places like the West Bank. It also sends a provocative slight against Muslims, for whom their third holiest site in in the city, as well as Christians who believe Jesus’ crucifixion and resurrection took place there. In wading into the tangle of Middle East diplomacy in this way, the President is betting his supporters at home will cheer louder than those in the regions may groan. 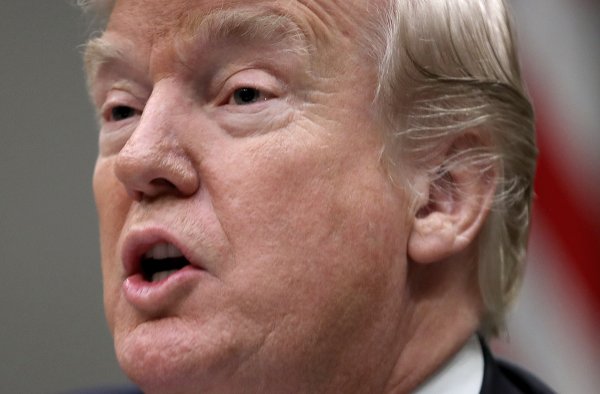