Senate Republican leaders breathed a collective sigh of relief Wednesday as all 52 GOP senators voted to begin debate on the tax reform bill.

But even as the vote pushed the bill past its latest test, it set up a critical few hours in which Republicans will have to address serious and at times contradictory criticism of the bill from their own caucus, with zero chance of support from Democrats.

For Republicans, time is of the essence. If they do not pass the tax reform bill this week, it will be sidelined by next week’s legislative struggle to secure funding to avoid a government shutdown. The deadline for doing so is next Friday, Dec. 8, and preliminary talks this week do not bode well well.

The fact a Republican bill cutting taxes faces these tests — while being broadly unpopular among American voters — is a testament to the haste and relative lack of transparency with which it was drafted. Written largely behind closed doors, the plan offers tax cuts and benefits for individuals that will overwhelmingly benefit wealthy Americans and slashes the corporate tax rate from 30% to 25%.

In an interview with TIME on Wednesday, Sen. Jeff Flake of Arizona — who voted yes on the motion to begin debate — excoriated the bill. He is one of at least four Republican senators who are dismayed by the extent to which the legislation will increase the federal deficit. (The official estimate says it will climb by $1.4 trillion over a decade; Flake and others believe the bill is heavy with temporary gimmicks that will ultimately cost much more.)

On Wednesday, Flake said he would vote against the bill in its current form.

“I would do it a lot differently, given where our deficit is,” he said of the bill. “I would focus just on the stimulative portions, and that’s the corporate tax. I wouldn’t do anything to individual rates. That’s not a big part of the bill’s value and it certainly doesn’t stimulate like the corporate tax cuts do.”

He is joined in those concerns by deficit hawks such as Sens. Bob Corker of Tennessee and James Lankford of Oklahoma. To offset the potential impact on the deficit, Corker has called for a s0-called “trigger,” a provision that would increase individual taxes if economic growth under the law failed to meet expectations.

“We’re still working on it,” he said on Wednesday, but declined to say if he’d vote for the bill without a trigger. “What do we call that? Conjecture. I don’t do a lot of conjecture.”

The trigger is largely unpopular among his Republican colleagues, who believe voters would see it as a tax hike. A possible alternative is a “spending trigger” — if economic growth fell short, it would be government spending, not the new tax cuts, that would be curtailed.

“I don’t think we need a trigger at all,” Sen. John Kennedy of Louisiana said. “But I prefer the trigger that would cut discretionary spending. It’s time, though, that we get this bill before God and country so the American taxpayer can see what we’re thinking. It’s time for us to saddle up and ride, and I’m ready to go.”

Not everyone is as enthusiastic. Sens. Ron Johnson of Wisconsin and Steve Daines of Montana have opposed the bill on the grounds that it benefits large corporations more than small businesses. Daines told Bloomberg on Wednesday that he had made progress on that front, with an increase in the deduction for small businesses to 20%.

Still, this is all talk until the time comes for senators to vote on proposed amendments to the bill. That only happens after a 20-hour debate period, meaning the end of the week is going to be an exhausting stretch for an already weary Republican conference.

But President Trump remained confident that progress will be made.

“The big day will be either tomorrow or the next day,” he said on Wednesday. “I would say do it now, we’re ready. They’re all working hard, it’s not so easy, it’s complicated stuff.” 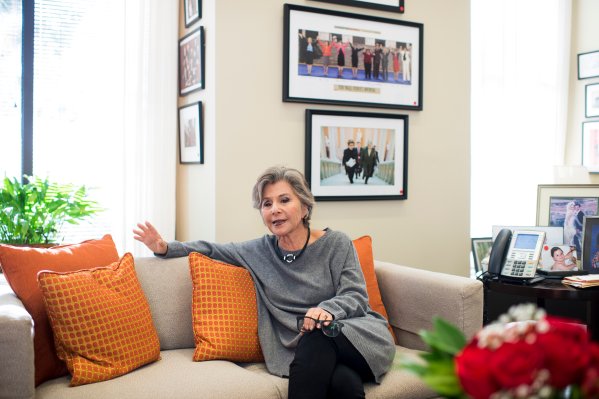 Barbara Boxer Predicts Roy Moore Will Be Expelled
Next Up: Editor's Pick