Access Hollywood set the record straight on Monday about recent reports that President Trump now claims the leaked tape in which he bragged about groping women was fabricated.

Trump suggested to a Senator and an adviser this year that the Access Hollywood tape — in which he said he “can do anything” to women because he’s a celebrity — was not authentic, the New York Times reported on Saturday. Shortly after it was leaked in October 2016, Trump acknowledged his comments and apologized for them.

“We wanted to clear something up that has been reported across the media landscape,” Access Hollywood host Natalie Morales said during the show on Monday. “Let us make this perfectly clear — the tape is very real. Remember his excuse at the time was ‘locker-room talk.’ He said every one of those words.”

“Look, the President addressed this. This was litigated and certainly answered during the election by the overwhelming support for the President and the fact that he’s sitting here in the Oval Office today,” she said.

Asked again whether Trump’s apology for the tape indicated that he believes it’s authentic, she said: “No. Like I just said, the President hasn’t changed his position. I think if anything that the President questions, it’s the media’s reporting on that accuracy.” 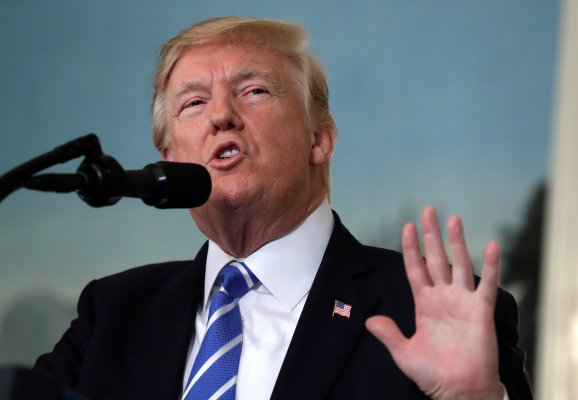 Here's How Every Trump Policy Proposal Plays Out
Next Up: Editor's Pick