Meghan Markle's Engagement Ring Has a Sweet Connection to Princess Diana. Here Are All the Details

When Prince Harry proposed to Meghan Markle, he presented her with a unique and stunning engagement ring unlike any other.

That’s because the Prince designed Markle’s ring himself, piecing it together with diamonds that have a historical significance for the him and his family, according to People.

Prince Harry, 33, and Markle, a 36-year old California-born actress and United Nations advocate, announced their engagement Monday. The couple will wed sometime in the spring of 2018, and both of their parents, along with the Queen and Prince Phillip, wished the couple well. (Also in spring 2018, Prince William and Kate Middleton will welcome their third child, who will replace Prince Harry as fifth in line to the throne.)

The newly engaged couple presented the ring on Markle’s hand Monday at the Sunken Gardens at Kensington Palace, where they appeared smiling and holding hands. The announcement of their engagement comes just after the 70th wedding anniversary of Queen Elizabeth II and Prince Philip.

Here’s everything we know about Markle’s engagement ring.

Prince Harry designed the ring himself, using diamonds that hold significance for him. The center stone of the ring is from Botswana, a country Prince Harry visited as a child and traveled to recently with Markle after her 36th birthday over the summer, according to People.

Prince Harry’s design was crafted by Cleave and Company, a London-based jeweler used by the Queen, according to People. At the company, goldsmiths can be commissioned to create unique pieces of jewelry that strives to be “unique, perfect and beautiful,” according to the company’s website.

Cleave & Company uses ethically sourced stones and has a history of creating gifts for heads of state and “private individuals” with “one-of-a-kind” creations, “sometimes created for a single important occasion.” And that philosophy appears to hold up for its involvement in Markle’s engagement ring.

“Cleave & Company are greatly honoured to have been of service and we wish Prince Henry and his fiancé the very best,” the company told TIME in an email. The company would not provide any other details about the ring or the process of creating it.

Prince Harry may have been following his brother’s footsteps by including an ode to his late mother in his engagement ring. Prince William gave Kate Middleton his mother’s engagement ring when he proposed back in 2010. The stunning 18-carat sapphire and diamond ring.

“It was my way to make sure my mother did not miss out on today and the excitement that we are going to spend the rest of our lives together,” Prince William told reporters at the time of his engagement, according to TIME’s report. 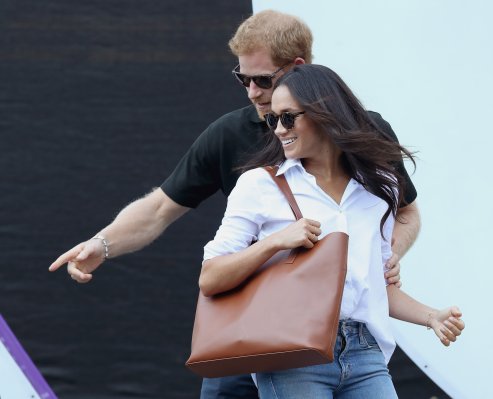 5 Ways Prince Harry and Meghan Markle's Engagement Is Groundbreaking
Next Up: Editor's Pick