The Internet Has Feelings About Trump's Presidential Turkey Pardon

Tuesday was Drumstick’s lucky day, as the 47-pound turkey was bestowed with an official presidential pardon from President Donald Trump in the White House’s Rose Garden.

Visitors and press assembled hours before the big moment, curious if the honor would go to Drumstick or his poultry compatriot, Wishbone, who had also been sent to Washington, D.C. for the annual occasion. The two turkeys enjoyed an evening at a local four-star hotel thanks to their sponsors, the National Turkey Federation, and spent the moments before the pardoning getting serenaded by a band and visiting the White House briefing room.

The White House put it up to an online poll to see which of the two would receive the ultimate on-air honor; 60% of the votes went to Drumstick.

Both of the birds, however, will now head off to Virginia Tech’s “Gobbler’s Rest” to live out the rest of their days in slaughter-free peace. But the internet has plenty to say about this year’s pardoning shenanigans, regardless of the outcome — including Trump’s jokes about Obama’s own pardon last year (to Tater and Tot). 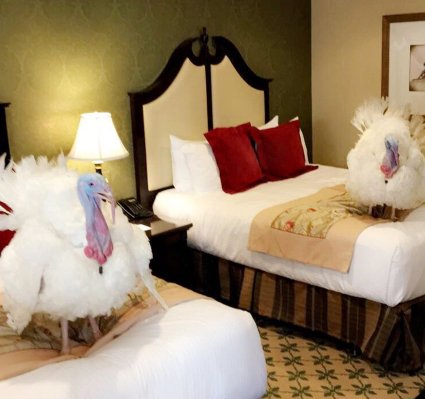 Meet the Two Turkeys Vying for the Annual White House Pardon
Next Up: Editor's Pick