Ben Affleck was forced to defend himself on the Late Show Thursday night after host Stephen Colbert pressed him on the sexual assault and harassment claims against former collaborator Harvey Weinstein – as well as his own allegations of misconduct.

Affleck said men in Hollywood must be “mindful of our behavior and hold ourselves accountable” in the wake of the scandal that has seen dozens of women accusing some of the biggest names in the industry of harassment, bullying, sexual assault and rape.

Weinstein has apologized, but denies any allegations that he had non-consensual sex.

Colbert segued from discussing the 20th anniversary of Affleck’s breakout hit Goodwill Hunting with the statement, “The person who made that made that movie for you, the person that started your career was Harvey Weinstein.”

The Justice League star replied, “This is a comedy show, correct?”

Affleck called the Weinstein allegations “hideous” and “awful” and said they “sort of tainted” Good Will Hunting, Shakespeare in Love and the other hits he made with Weinstein. He also reiterated his pledge to donate his residuals from his Weinstein movies to RAINN (Rape Abuse Incest National Network) and Film Independent.

“Just the kind of thing that we have to, as men, I think as we become more aware of this. Be really, really mindful of our behavior and hold ourselves accountable and say, ‘If I was ever part of the problem, I want to change. I want to be part of the solution,’ ” he said.

Colbert also brought up the allegations leveled against Affleck, including actress Hilarie Burton claim that he groped her in 2003. “What I was accused of by a woman was of touching her breast while I gave her a hug,” Affleck said of the claim he has previously apologized for. “I don’t remember it, but I absolutely apologized for it. I certainly don’t think she’s lying or making it up.” 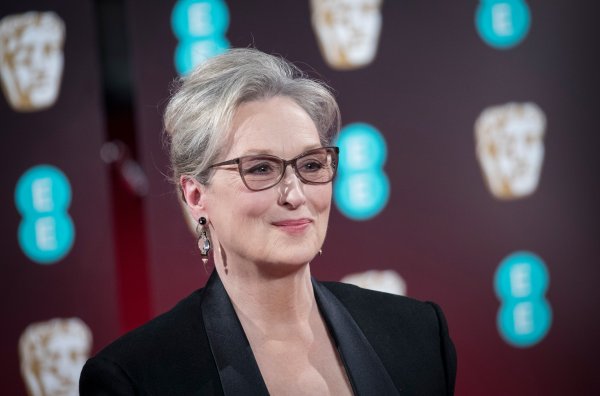 Meryl Streep: I 'Dealt With Real Physical Violence'
Next Up: Editor's Pick