Al Franken Could Face an Ethics Committee Investigation. Here's How That's Gone for Other Senators

Minnesota Democrat Sen. Al Franken is now among the ranks of a growing list of men who have been called out for engaging in behavior that has left women feeling harassed, violated, and confused after a Los Angeles news anchor named Leann Tweeden said the former comedian said he kissed and groped her without her consent.

The backlash against Senator Franken was swift. He apologized, but not before lawmakers on both sides of the aisle condemned his behavior as unacceptable. Several Democratic lawmakers said they would donate money they’d received from Franken’s leadership PAC to charity. Many, including Democratic and Republican leaders, are now calling on a Senate panel to investigate the incident. In his own statement, Franken asked that an ethics committee investigation be conducted. ” I understand why we need to listen to and believe women’s experiences,” he said. “I am asking that an ethics investigation be undertaken, and I will gladly cooperate.”

This has been a jam-packed week for the issue of sexual misconduct in Congress. On Tuesday, Congresswoman Jackie Speier testified that two current members of Congress have sexually harassed people. A bipartisan group of lawmakers introduced legislation on Wednesday that would overhaul the current process through which victims report harassment and make annual anti-harassment training mandatory. This happened as the Senate grappled with the possibility that Alabama Republican Roy Moore, who has been accused of sexually assaulting teens when he was in his 30s and pursuing relationships with young girls could win an upcoming special election. Sen. McConnell has said that if Moore wins, he’d “immediately” face the committee.

Members of the committee were mum as the Franken news broke on Thursday, but if the Ethics Committee decides to move forward with Franken, the issue of sexual harassment is guaranteed to stay in the news. Here’s how other investigations into sexual misconduct bore out.

The Senator Who Was Defiant to the End

Investigations into sexual misconduct have come up in Congress several times over the past five decades.The bipartisan Senate Select Committee on Ethics investigates misconduct in the legislative body and a similar committee does the same in the House of Representatives. Activity that reflects poorly on the Senate, violates the body’s code of conduct, against the law or against Senate rules is fair game. The committee can recommend disciplinary action and rule changes, and also report illegal activity to federal and state authorities.

One of the biggest cases came in the early 1990s, when Republican Sen. Bob Packwood was accused of sexually harassing at least 18 women including his own staffers, lobbyists, and campaign aides. Ten women gave detailed accounts of Packwood’s unwanted advances to the Washington Post. An aide said he kissed her on the back of the neck and once tried to pull off her clothes. Another said he chased her around a motel room before grabbing and kissing her. He told a mail clerk he liked her “wholesome good looks” and kissed her, too. A pro-abortion activist said he kissed her, too. A former intern, whose mother headed up a coalition of women’s groups in his home state of Oregon, said he read her sexually explicit jokes.

The investigation into Packwood, who ironically was a public advocate for women’s rights and equal treatment, lasted nearly 3 years and ended with the bipartisan committee voting unanimously to recommend that he be expelled from the Senate for engaging in sexual and official misconduct. He resigned in Sept. 1995 an the New York Times declared he left the Senate as a “pariah in his state.”

Not every case of misconduct has gone that far. In 1992, not long before the Packwood news broke in the Post, the Senate ethics panel decided not to investigate Sen. Brock Adams, a Democrat from Washington, who was accused of sexually harassing and in one case, raping, several women over a period of two decades. The Associated Press reported at the time that five members of the Ethics Committee signed a letter to the National Organization for Women, which had called for the investigation, saying they weren’t taking up the investigation because the incidents occurred before the Senator took office and because the alleged rape had already been investigated by the U.S. Attorney’s office. “Moreover, in the five years since the incident allegedly occurred, the committee has never received from the alleged victim any indication of a desire to initiate proceedings here,” the letter said.

Brock denied the allegations, but his re-election bid did not survive the scandal. He dropped out of the race when the story was published, but did not immediately resign.

The Senator Who Resigned

It wasn’t a case of harassment, but the ethics panel did get involved after Sen. John Ensign, a Nevada Republican, admitted to having an affair with the wife of a man the New York Times described as his “best friend and most loyal aide” starting in 2007. If the affair weren’t salacious enough, the Senate Ethics Committee opened an investigation into whether the Senator tried to buy his former aide’s silence when he allegedly threatened to publicize the affair by trying to help him get lobbying jobs. In 2011, amid the investigation, Ensign resigned.

It should be noted that his is hardly an exhaustive list — a number of House members have been accused of sexual misconduct, including Reps. Dan Crane and Gerry Studds who both were censured in 1983 after an ethics panel recommended they be punished for having sex with Congressional pages. Rep. Mark Foley also quickly resigned in 2006 amid reports that he’d exchanged sexually explicit messages with a former page. Some four in 10 women Congressional staffers who took a CQ Roll Call survey last year said sexual harassment is a problem on Capitol Hill. One in six said they had been victims of it themselves. Both the Senate and the House have recently moved to require mandatory hands-on anti-harassment and discrimination training. 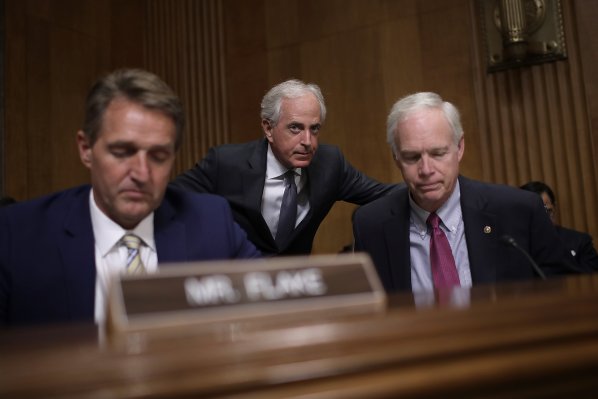 4 Republican Senators in Private Talks That Could Kill Current Tax Reform Bill
Next Up: Editor's Pick