Roy Moore, the Republican candidate for Senate in an Alabama special election ,has been accused of assaulting and pursuing relationships with teenage girls, one as young as 14, when he was in his 30s. On Thursday, Los Angeles talk radio host Leann Tweeden said that Democratic Sen. Al Franken had forcibly kissed her and later appeared to grope her in a photo taken while she was sleeping in 2006.

Amid these allegations, a bipartisan group of lawmakers has come together to improve the way Congress responds to sexual harassment.

Democratic Rep. Jackie Speier of California, who recently shared her own story of being forcibly kissed by a senior aide back when she was a staffer on Capitol Hill, joined with Democratic Sen. Kirsten Gillibrand of New York to introduce the Member and Employee Training and Oversight On Congress Act on Wednesday.

Under the proposed bill, referred to as the ME TOO Act after the hashtag women used to share their stories of sexual harassment on social media, the process to report complaints would be streamlined and become more transparent. It would also make annual anti-sexual harassment training mandatory and boost support for accusers.

The bill came just one day after Speier testified that two current members of Congress, a Democrat and a Republican, have sexually harassed others. She has not named the members. During her testimony, the Democrat also outlined the lengthy, cumbersome process a victim of sexual harassment currently has to undergo if they decide to report the behavior to Congress’s Office of Compliance.

Victims are required to receive 30 days of mandatory counseling, sign a non-disclosure agreement before moving on to 30 days of mediation, and then go through a 30-day “cooling off” period before they can file a formal complaint. Interns and fellows in the Congress do not have access to the process.

Speier said Wednesday that in the 20 years since the Office of Compliance was established to address Congressional workplace issues some 260 settlements have been reached to the tune of $15 million.

“That $15 million has been there to silence victims of all types of workplace discrimination. Today we are here to change that,” she said at a news conference on Wednesday. “Abusers and sexual predators have thrived in the shadows in our current system where all the power is deliberately taken away from the survivor.”

Lawmakers have been calling attention to the issue of sexual harassment on Capitol Hill for some time. Every year since 2014, Speier has introduced legislation to change the way offices and staff are trained on preventing such abuse. But the issue has gained traction in the wake of allegations against Hollywood moguls, journalists and politicians. 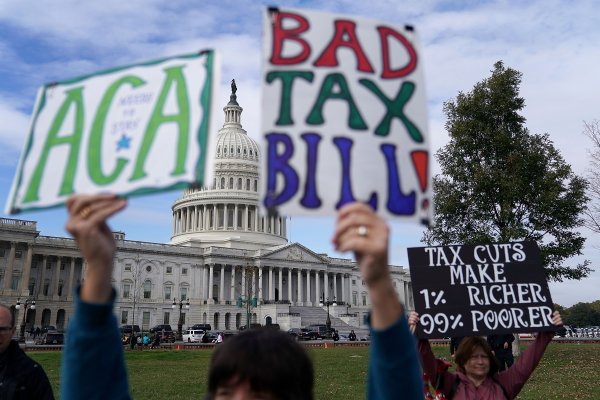 Poll: Most Americans Don't Like the Republican Tax Reform Plan
Next Up: Editor's Pick