Theresa May's Britain Is Headed for a Brexit Train Wreck

Britain's Prime Minister Theresa May gestures during an industry roundtable with leading figures from the tech sector hosted by herself and Britain's Chancellor of the Exchequer Philip Hammond at 10 Downing Street, London on November 15, 2017.
Toby Melville—Pool/AFP/Getty Images
By Ian Bremmer

Things aren’t going Theresa May’s way. Britain’s Prime Minister was already struggling to unite a Cabinet divided over how best to pull the country out of the E.U. Now she’s contending with a sexual-harassment scandal that has implicated several of her Conservative lawmakers and forced Defense Secretary Michael Fallon to resign. Some 40 members of Parliament from her party have signed a letter of no confidence in her leadership. Events are spinning beyond her control.

All of this has fed speculation that Brexit might still be reversed. Yet there’s no compelling evidence that those who voted for divorce have softened their stance on reclaiming control of British law and borders from bureaucrats in Brussels–or their belief that the E.U. has a bleak future. Britons can see that European leaders want member states to give up yet more sovereignty on budgets and borders. They see countries like Italy and Greece still coping with refugees, and eastern E.U. members like Poland and Hungary becoming less democratic and more fractious.

A U-turn isn’t impossible, especially if the Conservatives lose their tenuous hold on government. But reversal remains highly unlikely, because the U.K.’s elected leaders have no compelling case to ignore the popular will. It’s also far from clear that a second referendum would produce a different result. Even if the opposition Labour Party comes to power, a Prime Minister Jeremy Corbyn would think twice before making a case for a Brexit backtrack, even if he wanted to. Just 100 of the 262 constituencies that Labour won in the June election voted to remain in the E.U.

May’s task of bringing the U.K. out of Europe won’t get easier. Talks with negotiators in Brussels over the terms of departure have stalled over the “divorce bill” Britain must pay the E.U. to leave. Boris Johnson and Michael Gove, May’s former rivals for leadership, have been accused of secretly pressuring the Prime Minister to push for a harder Brexit and to prepare for the possibility of leaving the E.U. without a deal.

Across the Channel, European leaders aren’t trying to woo Britain back. The strongest E.U. advocates, particularly French President Emmanuel Macron and German Chancellor Angela Merkel, are more than happy to see Britain agonize over its post-E.U. future, in part to make clear to Europe’s other Euroskeptics just how painful divorce can be. Nor will they miss Britain’s consistent obstruction on issues like a common European defense policy, euro integration and fiscal union. And they’re happy to pick up the banking business that Britain will lose as it attempts to go its own way.

Elections have consequences, and struggles over Brexit have only just begun. 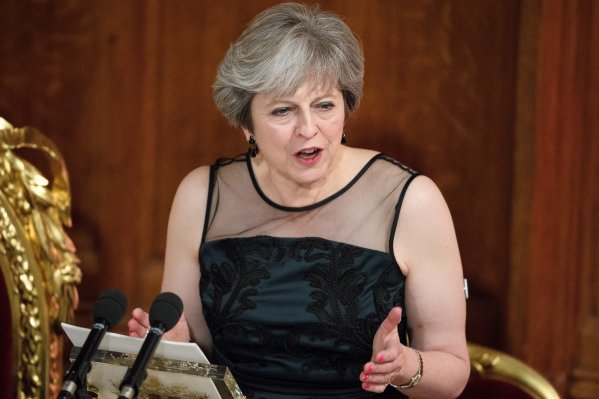