The president of Hobby Lobby and head of the new Museum of the Bible said that Alabama Senate candidate Roy Moore should step aside only if allegations of sexual misconduct are true.

In an interview with TIME Tuesday afternoon, Steve Green, the museum’s chairman and president of a socially conservative craft store which successfully sued the federal government over contraception in 2014, said he was not sure about the allegations from five women that Moore pursued sexual relationships with them when he was in his 30s and they were teens.

“If it is true, yes; if it is not, no. I don’t know if it is,” he said. “But those obviously are actions that would be inappropriate. So if they were true, then he would … it would be best for him to step aside.”

Prominent Republican members of Congress have said they believe the women who have come forward, and have called on Moore to step aside.

“These allegations are credible,” House Speaker Paul Ryan said on Tuesday. “If he cares about the values and people he claims to care about then he should step aside.”

“I believe the women, yes,” Senate Majority Leader Mitch McConnell said on Monday. “I think he should step aside.”

Sen. Susan Collins of Maine tweeted on Monday, “I did not find his denials to be convincing and believe that he should withdraw from the Senate race in Alabama.”

Some lawmakers, including Colorado Republican Senator Cory Gardner, have even suggested Moore could be expelled from the Senate if he wins the election.

However, many lawmakers only step down if the allegations are true.

Some supporters of Moore have even used the Bible to defend him against the allegations. “Take Joseph and Mary,” Alabama state auditor Jim Ziegler told the Washington Examiner on Thursday. “Mary was a teenager and Joseph was an adult carpenter. They became parents of Jesus.”

Moore, a populist Christian, has repeatedly used the Bible to support his political career. He has called the Ten Commandments the “moral foundation of the Constitution,” and said that in the past, he has “prayed not to get appointed unless it was God’s will … I got appointed.”

Asked what he thinks about someone like Moore using the Bible in his political campaign, Green said, “We are all imperfect, which is what the Bible teaches us. So we all have flaws, but there are ways we address those flaws.” 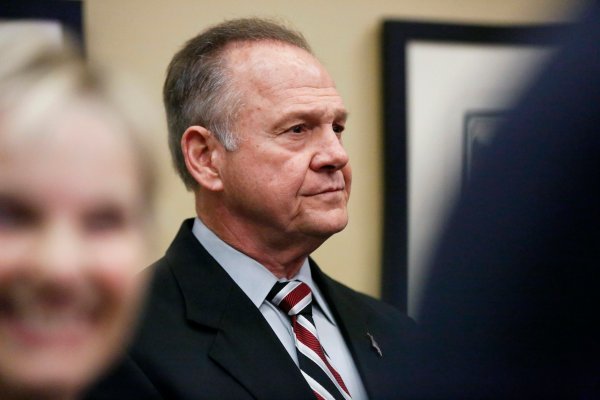