Ina Garten, Bobby Flay and 7 Top Chefs Tell You How Not to Mess Up Thanksgiving Dinner

Cooking a Thanksgiving dinner takes a lot of work, whether you’re a professional chef or a first-time host. There’s the risk of overcooking (or undercooking) the turkey, the potential disasters of lumpy gravy and goopy cranberry sauce — not to mention the difficulty of wrangling the dietary restrictions and varied tastes of your guests. To get a delicious dinner on the table with minimal stress, let the culinary pros step in. Here are their tips on how to make Thanksgiving easier this year.

Do: Cook your stuffing separately from the turkey to avoid overcooking the bird.

Don’t: Deep-fry your turkey. “Nobody wants a trip to the hospital. It’s dangerous. You’re dealing with a huge cauldron of hot fat, and you’re lowering this turkey into it. Just put it in the oven.”

Do: Incorporate current events into your dinner. Along with turkey, Flay will prepare a Puerto Rican–style pork roast to start a conversation about Hurricane Maria’s aftermath.

Don’t: Go with canned cranberry sauce, if you can help it. Flay has to buy it for a cousin who loves it, but he leaves the sauce in the shape of a can “so everybody knows” where it came from.

Do: Make side dishes in advance to avoid last-minute scrambling. “Prep what you can before the day, so that you can spend time with family.”

Chef at The Grey in Savannah, Ga.

Do: Remember Thanksgiving is the perfect holiday for macaroni and cheese. “I don’t really indulge in that dish often. But somebody has to make it.”

Don’t: Give up on Thanksgiving traditions, like watching football with family—the people you love won’t be around forever. “I don’t get to break bread with my family and friends often. Not to be corny, but just be in the room in the moment.”

Do: Make sure you cook enough for leftovers. “There has to be an extra turkey just dedicated to leftovers. I look forward to the sandwiches so much.”

Chef at Zahav in Philadelphia

Do: Consider replacing the turkey with other types of fowl, like capons — castrated roosters known for their flavorful, juicy meat. “It’s kind of like a super-chicken.”

Don’t: Try to heat up all the food at once — you risk overcooking some dishes, and your stove won’t have enough room. “Be O.K. with things being a little room temperature.”

Do: Stick to mainstays if they’re crowd pleasers — her pumpkin-ginger tart has been a family staple for 20 years. “God forbid I don’t make that.”

Don’t: Worry about accepting help and letting people pitch in. “It’s not always perfect, and not every dish comes out on the right platter, but it takes so much of the stress off for the main cook.”

Restaurateur and host of ABC’s The Chew

Do: Go overboard on the dishes you really love — at Symon’s Thanksgiving table, there are three different kinds of stuffing: a sausage stuffing that’s a family tradition, a vegetarian stuffing and a wild card stuffing with different flavors each year.

Don’t: Feel pressure to carve the turkey at the table. “There’s romance in that, but it’s much easier to break it down and put it on the platter.”

Do: Offer vegan options, like cauliflower steak marinated in coconut milk, so every guest feels included. “You’ll find that the meat-eating crowd digs in as well.”

Don’t: Set out to make too many dishes if your kitchen can’t handle it. “Make a menu and then cross off half of it, and make that.” 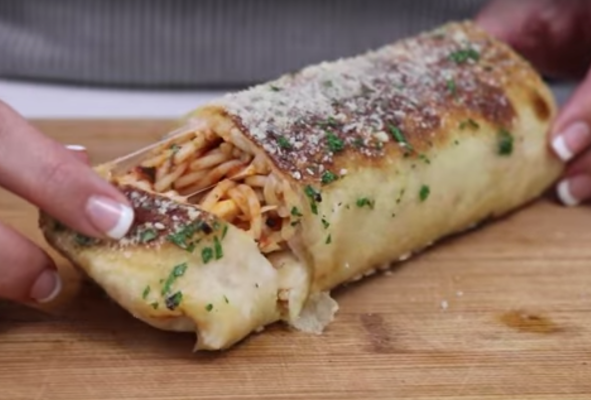 Yes, Spaghetti Burritos Are Now a Thing
Next Up: Editor's Pick