A customer views the iPhone X upon its release in the U.K on November 3, 2017 in London, England. The iPhone X is positioned as a high-end, model intended to showcase advanced technologies such as wireless charging, OLED display, dual cameras and a face recognition unlock system. (Photo by Carl Court/Getty Images)
Carl Court—Getty Images
By Lisa Eadicicco

Apple is rolling out a software update that fixes an autocorrect glitch affecting iPhones and iPads that changes the letter “i” to the letter “A” and a symbol.

Apple previously provided users with a workaround to mitigate the issue. The company advised iPhone and iPad owners to use the Text Replacement tool found in the settings menu to fix problem until a proper fix was released.

To install the new update, open your iPhone or iPad’s settings menu, tap General, and choose “Software Update.” A Wi-Fi connection is required to download and install the new software.

The update comes three days after some iPhone and iPad owners began reporting the issue once they had updated their devices to iOS 11.1. In many cases, affected users would find that the keyboard corrected the letter “i” to an “A” followed by a question mark in a box. 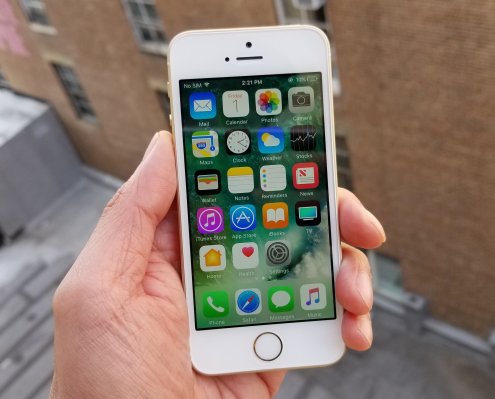 The 4 Best Smartphones for Clumsy People
Next Up: Editor's Pick