All hail Eminem, who is — at long last — back with new music. “Walk on Water,” his surprise release out noon on Friday, features none other than Beyoncé, adding royal flair to an already hotly-anticipated new drop. “Walk on Water” is a soaring, emotionally resonant step in the return to the spotlight of one of rap’s boldest voices. Those used to the Detroit rapper’s fiery delivery will be surprised by his more measured approach here: over the course of five minutes and the backing of a melodic piano track, an introspective Eminem reflects on the challenges of living up to his own lauded reputation, with Beyoncé agreeing in a chorus.

“Why are expectations so high? Is it the bar I set, the arms I stretch, but I can’t reach?” he raps, kicking things off.

“I’ll walk on water, but I ain’t no Jesus,” Bey then follows up in the chorus. “I’m only human, just like you. I’ve been making my mistakes, oh if you only knew. I don’t think you should believe in me the way that you do, because I’m terrified to let you down.” It’s a particularly accurate refrain for both stars, who have been consistently deified for their work.

The Detroit rapper started teasing the song earlier in the week with a cryptic Instagram post featuring a fake prescription medication note. It’s part of a campaign for a forthcoming untitled album that includes a website for a faux medication of the same name. This is Eminem’s first official release since “Campaign Speech,” a seven-minute political takedown that came out back in 2016. He also delivered a scathing four-minute cypher during the recent BET Awards, igniting online conversation over his controversial anti-Trump lines.

But at the end of the song, Eminem’s signature swagger comes back into play: “But as long as I got a mic I’m godlike, so me and you are not alike,” he spits as the beat switches, hinting at what’s to come. 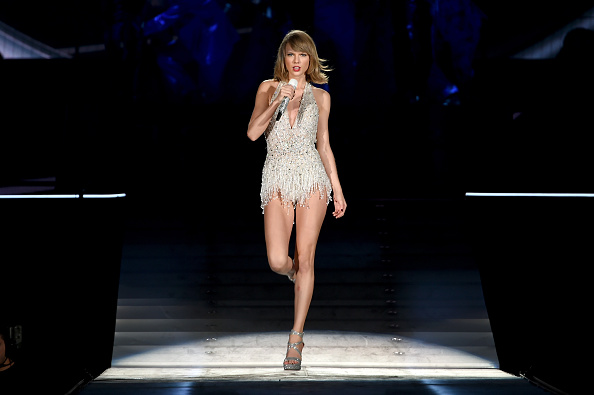 Taylor Swift's Song 'Dress' Is Giving the Internet a New Dress to Freak Out Over
Next Up: Editor's Pick