Bush Biographer: 41 and 43 Are 'Anathema' to Trump

George H.W. Bush and George W. Bush have found themselves back in the news lately, for better and worse; the former for allegations of groping, the latter for speaking out against the nationalism that has come to define the Trump era. Now, their explicit disapproval of the 45th president has made its way into a new book by Mark K. Updegrove, The Last Republicans, which quotes H.W. as calling Trump a “blowhard” during the campaign and confirms that he voted for Hillary Clinton, while W. voted “none of the above” in the 2016 presidential face-off. TIME spoke with Updegrove about his biography and the legacies of 41 and 43.

TIME: What made you want to write this book?

Updegrove: It’s a story that needs to be told. This is the first father-son presidency in nearly 150 years, and it may be the last. And it’s a more significant father-son relationship because there was only eight years between the two presidencies and the elder Bush, Bush 41 was a spry and relatively young 76-year-old when his son took office. You need, for the sake of history, to explore that relationship and how it played out in particular during Bush 42’s presidency. You also want to know the influence that 41 had on 43, and prior to that, how does one future president spawn another? That’s an amazing story that need to be told, and the story can only come from the principals themselves.

You have boldly titled the book The Last Republicans. What do you think is the future of the Republican Party?

I think that’s up for the electorate to decide, and the party itself, but it is very clear that there is a battle afoot for the soul of the Republican Party. This certainly is not the party of George H.W. Bush or George W. Bush.

What are their thoughts on the future of conservatism in the U.S.?

I know that in the conversations that I’ve had with George W. Bush, he’s concerned about what he calls the twins of negativity: isolationism and protectionism becoming more of a factor in our daily discourse. I think he is increasingly concerned about that with the election cycle of 2016. Both Bushes were determined for the United States to be engaged in the world, and ultimately to be what they would both call a force for good. I think that internationally — and they also saw that domestically, they campaigned on platforms based on compassion. George H.W. Bush wanted a kinder, gentler nation; George W. Bush campaigned on a platform of compassionate conservatism. There isn’t a great deal of compassion in the Republican Party today. And the things that the Bushes symbolized and tried to exemplify — humility, civility, decency, the notion of putting service above self — those are anathema to Donald Trump.

Did you expect them to be more forthcoming about Trump both during the election and after?

I was pleased at how candid they were about Trump during the election cycle. But I want to emphasize that the material that I got from them on Trump was just before the election, it wasn’t after, and it would surprise me deeply if either Bush were to speak out about Trump directly after he was president, because they both revere the presidency and wouldn’t want to compromise the dignity of the office, or the president, the sitting president, that’s really an unwritten rule among former presidents, and there are very few instances in which it’s been violated. It wouldn’t surprise me if Trump violated that as a former president. He certainly violated much of the protocol as incumbent president.

But it is unusual that that neither of them voted for their party’s nominee.

It’s quite remarkable that these two former Republican presidents, our last two presidential Republican standard-bearers, did not vote for Donald Trump, and I think that says everything you need to know about their feelings.

How have you felt about being in the news for quoting George H.W. Bush as calling Trump a blowhard?

And he said that before Trump won, right?

What surprised you most in your research or conversations for this book?

There are many misconceptions that we have about both of these men. One is that George W. Bush is the prodigal son, and he certainly strayed from the path every now and again and was an irritant to his father at times, but his father ultimately had great faith in George W. Bush. And as George W. Bush put it, ‘I was never the prodigal, because I never left my family.’ And if you look at the Bush family, they’re extremely close and George W. Bush at least figuratively never left his family. The other thing is the notion of Dick Cheney being this Machiavellian puppet master pulling the strings of Bush’s presidency. George W. Bush said very forcefully when talking about the influences of Dick Cheney and Donald Rumsfeld, “Cheney and Rumsfeld didn’t make one fucking decision.” Another is the [idea] that 41 had great consternation about his son’s presidency. I think there was concern at times, but there was a thought that 41, as a former president and as George W. Bush’s father, was at least figuratively taking him to the woodshed on occasion, or implementing policy that he himself would never have done as president. And again, that is not true — George W. Bush asked his father at Camp David whether he should take out Saddam Hussein and nation-build in Iraq, and his father said, ‘If the man doesn’t comply with U.N. resolutions, you don’t have any choice.’ That was the only advice that he sought from his father about Iraq. His father would never have done anything to compromise his son’s presidency. So that was the extent of it. While he might have held reservations about where the war went, privately, they were not something he would have ever thought of expressing publicly, nor would he have taken any action to undermine his son’s presidency.

What do you make of the groping allegations against HW?

It is unfortunate because it’s so uncharacteristic of George H.W. Bush. I’m quite confident you’ll not hear anything about George H.W. Bush doing anything inappropriate to women earlier in his life. But he’s an old man and I think there are a number of things at this stage of his life that he would never have thought of doing at an earlier stage of life. I think it’s probably just a symptom of age. And as offensive as it might have been to those women, I think it was an unintentionally offensive action on the part of the 41st president. 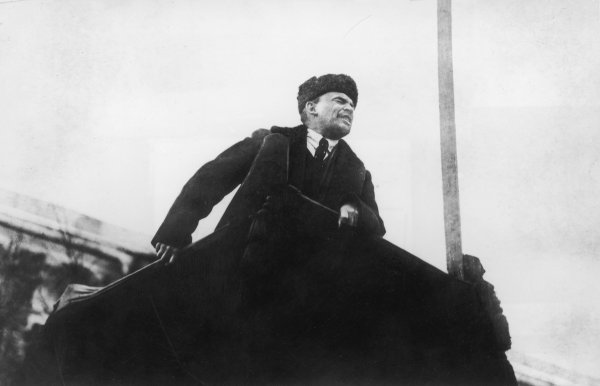 Vladimir Lenin Biographer: 'He Is the Godfather of Post-Truth Politics'
Next Up: Editor's Pick