'I'm Not a Hero': Man Who Shot and Chased Texas Church Gunman Shares His Story

A local man who shot at the Texas church shooter before giving chase to the gunman has spoken about the experience.

Stephen Willeford, a resident of Sunderland Springs, told Arkansas news station 40/29 that he was at home when his daughter came to his bedroom and told him that she heard gunshots coming from the First Baptist Church nearby.

“I kept hearing the shots, one after another, very rapid shots – just ‘pop pop pop pop’ and I knew every one of those shots represented someone, that it was aimed at someone, that they weren’t just random shots,” Willeford said.

A former NRA instructor, Willeford decided to load his rifle while his daughter scouted the situation outside. She told him that he saw a man in black tactical gear firing at the church. So Willeford, without even putting on his shoes, grabbed his firearm and ran across the street to the church to the confront the shooter.

“He saw me and I saw him,” Willeford said. “I was standing behind a pickup truck for cover.” The pair exchanged gunfire.

“I know I hit him,” Willeford said. “He got into his vehicle, and he fired another couple rounds through his side window. When the window dropped, I fired another round at him again.”

The gunman, later identified as 26-year-old former Air Force member Devin Kelley, decided to flee the scene and speed down the highway.

Willeford spotted Johnnie Langendorff in his pickup truck at a stop sign. He ran over and asked him for help.

“That guy just shot up the Baptist church. We need to stop him,” Willeford told the driver.

“I was strictly just acting on what’s the right thing to do,” Langendorff told reporters earlier Monday, according to the Associated Press.

As they drove after the Kelley the pair called 911 to give a description of the assailant. Eventually, they caught up to Kelley’s truck, who under pressure hit a road sign and flipped his truck into a ditch.

Willeford said that he’s not a hero. “I think my God, my Lord protected me and gave me the skills to do what needed to be done,” he said.

When the dust had settled, officials revealed that Kelley killed 26 people in the rampage, the largest mass shooting in Texas history. 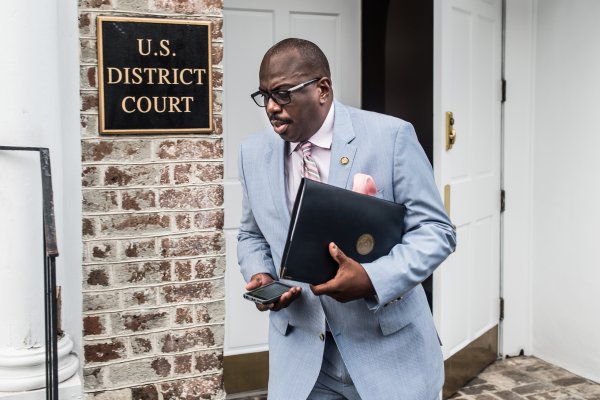 'The Pain Won't Go Away.' Sister of Charleston Shooting Victim Reacts to Texas Attack
Next Up: Editor's Pick