'The Opposite of Game of Thrones.' What the Arrest of Prince Alwaleed Bin Talal Really Means

In Riyadh in April, Prince Alwaleed Bin Talal, one the world’s richest men with investments spanning the globe, sat down with Robert Jordan, a former U.S. ambassador to Saudi Arabia. In their conversation, the prince expressed his approval for an overhaul of the Saudi economy led by the then-Deputy Crown Prince, Mohammed Bin Salman. In private, Alwaleed’s words were consistent with his public statements of support for Prince Mohammed, who at 32 is now apparent to the Saudi throne — and who ordered Prince Alwaleed’s arrest along with that of 10 other Saudi royals.

Over the weekend, Mohammed Bin Salman set in motion an unprecedented crackdown that included the arrest of dozens of senior Saudi figures, including Prince Alwaleed and the other royals. He also replaced the economy minister and the commander of the National Guard, taking control of the last branch of the security forces that was not yet under his power. The Saudi government said the arrests were taken as a part of a crackdown on corruption, but they appear to be a part of a sweeping effort to consolidate the young crown prince’s power within the Saudi state.

In interviews, analysts and diplomats with contacts inside the Saudi royal family suggested that some the royals had been chosen for arrest because they possessed power independent of the crown prince, who is often referred to by his initials, MBS. While rumblings of discontent within the ranks of the royal family surfaced when he was appointed crown prince in June, there was no sign of a real challenge against the young prince’s authority. The roundup of high-profile Saudis did not spare those who expressed support for MBS, including Alwaleed.

“It’s the equivalent of having Bill Gates, Warren Buffet, and Colin Powell arrested. It is a shocking display of power,” Jordan, the former ambassador, told TIME.

The arrests also signal a new pinnacle in the meteoric rise of Mohammed Bin Salman. In less than three years, the young prince has gone from being a relatively obscure royal known for his purchase of a $550 million yacht from a Russian vodka tycoon, to one of the most powerful and controversial leaders in the Middle East. Appointed minister of defense in 2015, he oversaw a disastrous war in Yemen in which more than 10,000 people have died.

His appointment as crown prince in June upended decades of royal tradition, sidelining the former Crown Prince, Mohammed Bin Nayef, who had been a favorite of Washington. Even before becoming the heir to the throne, his portfolio was vast. He is in charge of an overhaul of the Saudi economy including a highly anticipated plan to sell shares of the state oil giant Saudi Aramco in an IPO. In a signal of a possible move toward social reform, the government announced in September a decision to end its embarrassing ban on women driving cars.

Now, the crown prince is amassing power not seen within the royal family in generations.

The arrests signal a move to quash remnants of the previous ruling coterie under the late king Abdullah Bin Abdulaziz, who died in 2015. Those arrested include two of Abdullah’s sons — Prince Mutaib, the former head of the National Guard once considered a possible contender for the throne, and Prince Turki, the former governor of Riyadh. Others include Bakr Bin Laden, chairman of the Saudi Binladen Group. According to observers, only one, Prince Mutaib, had a political power base of note. At least some of the detainees are being held at the Ritz-Cartlon in Riyadh.

“It sends a message to everyone within the kingdom that MBS has a direction he intends to pursue, so you better bend the knee,” said H.A. Hellyer, an analyst with the Washington-based Atlantic Council. “Bending the knee isn’t simply bending the knee; it’s bending the knee as far as he wants.”

The churn within Saudi Arabia coincided with ripples of instability in the wider region related to the kingdom’s contest for power with arch rival Iran. Also on Saturday, Lebanon’s Prime Minister Saad Hariri resigned, a move most analysts believe he made at the urging of Saudi Arabia, which is allied with his bloc in Lebanese politics. Hariri made the announcement from Saudi Arabia, during a speech in which he denounced Iran and said he feared for his life.

The detention of Prince Alwaleed produced global reverberations. His investments include portions of Twitter, Citigroup, and Lyft, as well as luxury hotels around the world. Shares of his $8.8 billion company, Kingdom Holding, plunged in trading on Monday. Prince Alwaleed was one of the most famous Saudis worldwide, but he was not known to have any political ambitions within Saudi Arabia, and his statements in public and private suggest he supported the crown prince.

“It’s actually the opposite of the Game of Thrones. There are no real actors mobilizing against Bin Salman,” said Toby Craig Jones, a historian at Rutgers specializing in Gulf monarchies, referring to the hit HBO show.

Now Prince Mohammed is positioning himself as an enforcer against corruption, bringing to heel some of the most ostentatiously wealthy members of the royal family. The allegations of corruptions are difficult to assess, given the permeable boundaries between the personal fortunes of individual royals and Saudi state funds. Some observers suggested that MBS was taking a gamble on seeking the approval of the Saudi public at the expense of discord within the royal family.

“He’s the first prince in modern Saudi history whose constituency has not been within the royal family, it’s outside it. It’s been young Saudis, particularly younger Saudi men in the street,” said John Jenkins, a former British ambassador to Riyadh. “The issue is can he produce effect out of this? Can he execute all the plans he has?”

Correction: The original version of this story gave the incorrect first name for Lebanon’s Prime Minister who recently resigned. He is Saad Hariri, not Rafiq Hariri. 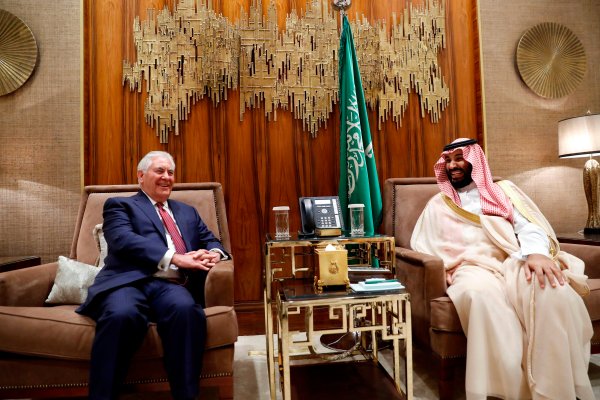 Saudi Arabia Will Return to 'Moderate Islam,' It's Crown Prince Says
Next Up: Editor's Pick