‘I Just Did What I Thought Was the Right Thing.’ Man Describes High-Speed Pursuit of Texas Church Shooter

Moments after a gunman killed 26 people inside a Texas church on Sunday, Johnnie Langendorff took off on a high-speed chase in pursuit of the shooter.

“I was strictly just acting on what’s the right thing to do,” Langendorff told reporters, according to the Associated Press.

Langendorff said he first spotted the shooter shortly after 11:20 a.m. when he drove by the First Baptist Church in Sutherland Springs, Texas, on his way to his girlfriend’s house. The bystander witnessed two men exchanging gunfire outside the house of worship. One was 26-year-old shooter Devin Kelley, and the other was an unidentified Good Samaritan who was trying to take him down, Langendorff said.

After the gunman jumped into his truck and sped off, the other man approached Langendorff and quickly told him the shooter had opened fire on a church service. The two then set out after Kelley, driving 95 mph on the highway, through traffic, Langendorff said. Langendorff said he was on the phone with dispatchers the entire time.

“The gentleman that was with me got out, rested his rifle on my hood and kept it aimed at him, telling him to get out,” he added. “There was no movement. There was none of that. I just know his brake lights were going on and off, so he might have been unconscious from the crash or something like that. I’m not sure.”

Authorities later found Kelley dead inside the vehicle, although it’s unclear how he died.

Langendorff, who has been widely hailed a hero, said he wanted to make sure the shooter was apprehended and brought to justice.

“He just hurt so many people. He just affected so many people’s lives. Why wouldn’t you want to take him down?” he said. “I just did what I thought was the right thing.” 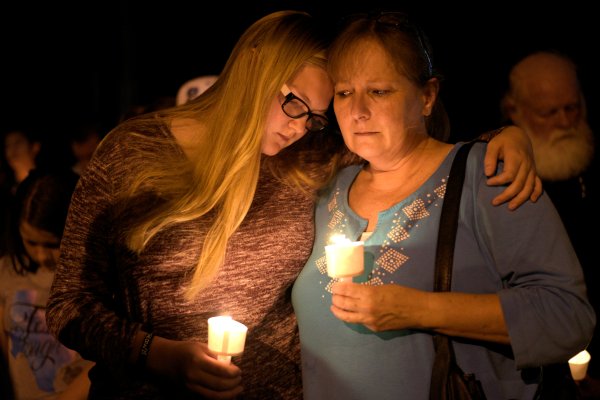 These Are the Victims of the Texas Church Shooting
Next Up: Editor's Pick