What to Know About Suspected Texas Church Shooter Devin Kelley

The gunman suspected of killing at least 26 people and injuring 20 others when he opened fire at a small town church southeast of San Antonio on Sunday has been identified by law enforcement officials as Devin Kelley.

Kelley died in the aftermath of the shooting at his mother-in-law’s church, the First Baptist Church in Sutherland Springs, a small community in Wilson County.

Among those who were killed was the 14-year-old daughter of the church’s pastor, Frank Pomeroy. The victims ranged in age from 18 months to 77 years, officials said Monday.

Here’s what to know about suspected church shooter Devin Kelley.

Who is Devin Kelley?

The gunman was seen walking into the First Baptist Church in Sutherland Springs on Sunday after crossing the street from a gas station around 11:20 a.m. Kelly, who was wearing all black tactical gear and a ballistic vest, began firing a Ruger AR assault-type rifle from outside the church upon exiting his vehicle. He then moved to the right side of the church and began shooting before entering the building and continuing to fire.

Officials say that after leaving the church, the gunman was confronted by a local citizen, who grabbed his rifle and chased him from the scene. The suspect drove away, and crashed his vehicle near the county line, where authorities later found his body.

Officials said he might have died from a self-inflicted gunshot wound but are awaiting an autopsy to determine his official cause of death.

Kelley served in the Air Force until he was discharged for allegedly assaulting his wife and child, according to service records obtained by the Associated Press. Kelley served in Logistics Readiness at Holloman Air Force Base in Otero County, New Mexico from 2010 until a 2012 court martial, according to Air Force spokesperson Ann Stefanek. Kelley was demoted and received a bad conduct discharge following the court-martial, and served a one-year detention sentence, Stefanek said.

What was Devin Kelley’s motive?

“It’s a senseless crime, but we can tell you that there was a domestic situation going on within this family,” Freeman Martin, regional director for the Texas Department of Public Safety, said at a press conference on Monday.

Martin said Kelly’s mother-in-law attended the First Baptist Church, and she had received threatening text messages from him.

“We can’t go into details about that domestic situation that is continuing to be vetted and thoroughly investigated, but we want to get that out there — that this was not racially motivated, it wasn’t over religious beliefs, there was a domestic situation going on within the family and the in-laws,” Martin said.

Did Devin Kelley have a gun license?

Officials said Monday that Kelley did not have a license to carry a concealed handgun, but did have a “noncommissioned, unarmed private security license similar to a security guard at a concert-type situation,” according to the Associated Press.

Fred Milanowski, special agent in charge of the Houston field division for the Bureau of Alcohol, Tobacco, Firearms and Explosives, said officers recovered a rifle at the church and two handguns in Kelley’s vehicle. All three firearms were purchased by Kelley.

What else do we know about Devin Kelly?

Authorities are investigating any social media posts Kelley made in the days prior to the attack, including one that appeared to feature an AR-15 semiautomatic rifle, AP reports. He does not appear to be linked to organized terrorist groups, according to officials. Authorities said it was unclear whether he was part of any militia groups.

Neighbors reported hearing intense gunfire coming from the direction of the address listed for Kelley in past days.

“It’s really loud. At first I thought someone was blasting,” Ryan Albers, 16, who lives across the road, told AP. “It had to be coming from somewhere pretty close. It was definitely not just a shotgun or someone hunting. It was someone using automatic weapon fire.” 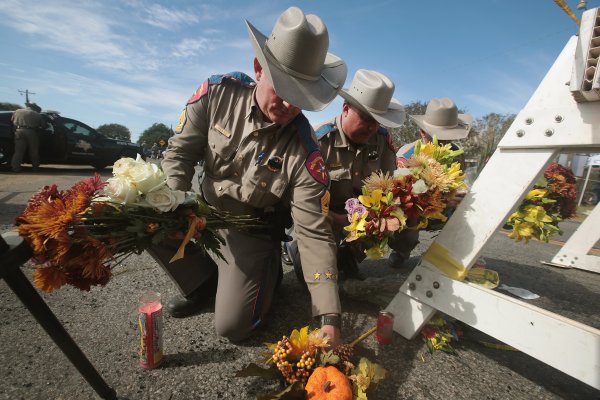 26 Killed in Church Massacre
Next Up: Editor's Pick