On Nov. 3, Donald Trump embarks on a 12-day trip to five different Asian nations. North Korea and trade are expected to top his agenda as he tours Japan, South Korea, China, Vietnam and the Philippines, where leaders will be keen to ingratiate themselves to the mercurial geopolitical neophyte.

It’s the longest official trip by a sitting U.S. President since 1992, when George H.W. Bush also spent 12 days in Asia, and famously suffered a bout of flu that led him to vomit into the lap of then Japanese Prime Minister Kiichi Miyazawa during a state dinner.

Trump will hope to avoid similar faux pas while moving the news agenda away from the recent indictments of senior former aides relating to Russian meddling in last year’s election. He travels with a phalanx of CEOs so expect a flurry of neatly tweetable trade deals.

Here’s what we can expect out of each leg:

Following a brief pit stop in Hawaii, Trump is due to touchdown in Tokyo on Nov. 5 to be welcomed by newly reelected Japanese Prime Minister Shinzo Abe, who during a trip to Washington in February bonded with his American host over multiple rounds of golf. Abe will double-down on that clubhouse camaraderie by booking Trump in for a round with world No. 4 golfer Hideki Matsuyama, as well as the more dubious honor of a performance by “Pen-Pineapple-Apple-Pen (PPAP)” viral singer Pikotaro.

But the real substance will be North Korea. Abe is most closely aligned with Trump’s zero-tolerance approach for Kim Jong Un’s escalating nuclear and missile tests, especially after two missiles were launched over Japan’s northern island of Hokkaido late September and early October.

Both leaders say the problem is China’s to fix, given 90% of North Korean trade occurs over their shared border, and believe talks are futile without firm steps towards denuclearization. But Japan lies on the frontline of any conflict, and Abe will be keen to avoid defiance veering into antagonism, especially as Trump has given to belittling the North Korean despot as “Little Rocket Man” and is in need of distractions.

“There’s a worry here that Trump might escalate tensions, issue provocative tweets, do things generally counterproductive to stoke up anxieties,” says Prof. Jeffery Kingston, a director of Asian Studies at Temple University in Japan. “The chances of him doing something counterproductive have risen precisely because of his domestic political woes.”

What Trump wants: a distraction; a bilateral free-trade agreement.
What his host wants: That distraction not to be nuclear war; a pass for Japan’s $68.9 billion trade surplus with the U.S.

Trump makes the short hop to South Korea on Nov. 7, but he won’t be visiting the DMZ, after an aide dismissed the seemingly requisite trip to the heavy fortifications that have divided the Korean peninsula for more than six decades as “a cliché.” But the regime of Kim Jong Un will dominate discussions as Trump visits Camp Humphreys, a U.S. military base about 40 miles south of Seoul, and has meetings with President Moon Jae-in. He is also due to address parliament.

Moon clashes with Trump and Abe on North Korea. While all agree costs must be imposed for the regime’s belligerence, he also wants to open dialogue and offer inducements. South Korea hosts the U.S. THAAD anti-missile batteries, whose advanced surveillance capacities China deems a security risk. However, Beijing and Seoul recently reconciled over THAAD, in what analysts are saying is a sign that both are rounding on Washington and Tokyo regarding the need for a softer approach on Pyongyang.

Trump will attempt to push back on that suggestion while reaffirming the U.S. East Asian alliances. However, “Because he’s transactional the feeling is you can’t really trust him,” says Kingston. “The worry [in East Asia] is that Trump could throw them under the bus.”

Trade is also very much on the table, as Trump has made moves to withdraw from the Korea-U.S. free trade agreement, or KORUS, unless it is renegotiated. Seoul has tentatively agreed.

What Trump wants: A united front on North Korea; perhaps the sale of some military hardware.
What his host wants: No provocations against the North; KORUS left intact.

The crest of Trump’s trip begins Nov. 8 in Beijing, where the leaders of the world’s established and ascendant superpower will knuckle down to discuss myriad issues including trade — such as U.S. firms being denied access to parts of the Chinese economy, particularly financial services — and North Korea.

Regarding the latter, Trump may ask China to turn off the oil spigot that helps keep its historic ally afloat, send packing all North Korean workers based in China, clamp down on cross-border smuggling cartels, and enforce sanctions on Chinese banks doing business with Pyongyang. Expect Chinese President Xi Jinping to make the right noises but with the usual gaps in enforcement.

Also expect a lot of flashy deals announced but little progress on substantive trade issues. In April, Trump and Xi agreed at Mar-a-Lago for a four-track comprehensive dialogue mechanism, including a 100-day action plan for economic cooperation, but that hasn’t really gone anywhere. The Chinese offer on steel overcapacity is basically the same as the previous administration received, with tepid progress on U.S. credit cards and U.S. beef. Trump may attempt to act tough; this week, the U.S. slapped anti-dumping duties on Chinese aluminum foil. Xi will try to distract him with gifts.

“China’s willing to sign trade deals all day long, as long it stays away from industrial policy and the sort of market access issues that they’re seeking to avoid,” says Christopher K. Johnson, a China specialist at the Center for Strategic and International Studies, told a recent panel discussion.

Normal practice would be a tour of the Great Wall, though word is this is being skipped, probably to avoid any awkward outbursts given Trump’s own version at the Mexican border remains stalled.

What Trump wants: Access for U.S. firms to restricted markets; a tougher stance on North Korea.
What his host wants: None of the above.

Trump vociferously abhors multilateral bodies in favor of bilateral, usually very transactional, relationships, though is adopting normal U.S diplomacy by attending two summit meetings during his trip. The first begins Nov. 10 in Da Nang at the Asia-Pacific Economic Cooperation Economic Leaders’ Meeting, where more than half the 21 members are also part of the Trans Pacific Partnership (TPP) free trade pact. But Trump nixed American involvement in TPP on his first workday in office, and his speech on “a free and open Indo-Pacific” is also a curious choice considering India is not an APEC member.

Trump’s speech echoes tested American policy toward Asia: to champion India as a large, pluralistic democracy that anchors the region with the U.S. on the other side of the Pacific, in a not-so-subtle counterweight to authoritarian China. When U.S. Secretary of State Rex Tillerson spoke about U.S.-India relations Oct. 18 before a visit to New Delhi, he praised the two nations as “the two bookends of stability,” which is similar to the message Defense Secretary Mattis preached at Singapore’s Shangri-la Dialogue in June. Expect Trump to express support for freedom of navigation and political expression. But difficulties arise regarding the President’s divergence with his hosts over free trade.

“The message will be that perhaps America First doesn’t run contrary to these principles — that they can coexist,” says Elizabeth Economy, a China expert with the Council on Foreign Relations.

What Trump wants: The U.S. to be treated as a leader without bearing any costs.
What his host wants: An acknowledgement that a free Asia-Pacific must mean free trade.

The second of Trump’s summit appearances starts Nov. 12 in Manila, where the Philippines’ own populist president, Rodrigo Duterte, welcomes his U.S. counterpart alongside the other nine leaders of the Association of Southeast Asian Nations (ASEAN): Brunei, Cambodia, Indonesia, Laos, Malaysia, Myanmar, the Philippines, Singapore, Thailand and Vietnam.

Duterte, whose bloody war on drugs has so far clocked up more than 7,000 extrajudicial killings, is chair of ASEAN during the bloc’s 50th birthday bash. In an April 29 phone call Trump praised Duterte for his “unbelievable job on the drug problem,” so don’t expect human-rights to be front and center of their bilateral meeting.

The gun-toting former Davao Mayor has also irked ASEAN members by agreeing to put aside a favorable ruling at the Permanent Court of Arbitration at the Hague regarding Chinese claims over disputed islands in the South China Sea and settle the dispute bilaterally with Beijing.

Trump will likely push for a joint communiqué on freedom of navigation in the strategic waterway, though hopes are gossamer thin owing to the veto power of Cambodia and Laos, which are increasingly vassal states of Beijing. Trump is also controversially due to skip the East Asia Summit (EAS) to return to Washington.

“This is an act of political vandalism,” writes Carlyle Thayer, emeritus professor at the Australian Defence Force Academy, in a briefing paper. “Xi Jinping can now stand up and address the EAS with his arm resting on Trump’s empty seat.” 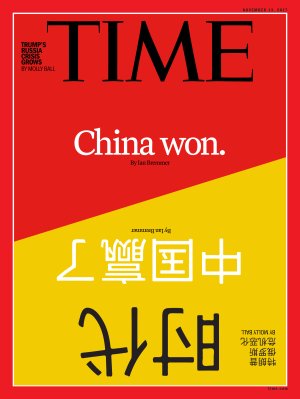 中国经济准备好赢得未来
Next Up: Editor's Pick