BACARDÍ Presents Dress to be Free Halloween Event, with Performances by Cardi B and Les Twins
Michael Loccisano—Getty Images
By Cady Lang

Despite the fact that temperature is many, many degrees below chilly, a rowdy double queue has formed outside of “Dress to Be Free” party at Bushwick Brookyn’s House of Yes club. It’s plausible that the revelers are here for the chance to party with Cardi B, the 25-year-old Bronx rapper with a Cinderella story who captured the hearts of the industry and the Internet with her irrepressible and outsized personality — and of course, her hit “Bodak Yellow.”

If “Bodak Yellow” is the club anthem of 2017 — and it most definitely is — consider how Cardi, a self-described “regular, degular, schmegular girl from the Bronx” got this far. Born Belcalis Almanzar, Cardi B rose to prominence as a stripper-turned social media darling whose refreshingly candid and brash personality nabbed her a spot on Love & Hip Hop: New York, which in turn, landed her a major record deal with Atlantic. When “Bodak Yellow” bumped Taylor Swift’s “Look What You Made Me Do” off the Billboard 100 to take the top spot — and put a solo female rapper at number one for the first time since Lauryn Hill in 1998 — it felt like a triumph to many: the rookie, underdog rapper with two mix tapes ousting pop’s reigning princess.

This meteoric rise to fame has both fans and critics anticipating Cardi’s upcoming studio album, the excitement being rivaled only by her recent engagement to Migos rapper Offset, something that Cardi herself can’t stop reveling about both on social media and in person.

“I’m excited because I feel like I’m locked in. He’s locked in. That I don’t gotta worry about ‘hmm, is he f-cking somebody else?’” she tells TIME. “He’s my man and I know that he’s mine and he’s committing to me and I’m committing to him. I’m ready to be with this man. Forever. That’s why I’m getting married because I want it to be forever,” she says, emphasizing “forever,” a word that became a viral catchphrase for her when she was on Love & Hip Hop and later inspired a song on one of her mix tapes.

When it comes to discussing the new album, Cardi says, “it’s going to be different from the past mix tapes that I put out because I just grew more as an artist. I study more sounds, I’m more focused, I’m getting better at my flows.”

As for the rumor that said album might include a track with Beyoncé, Cardi’s sound engineer Michael Ashby hinted at in a now-deleted Instagram story, Cardi says, “Instagram has said plenty of times that I’m pregnant, Instagram has said a lot of things about me that are not true, so I don’t even know where that’s coming from,” she says.

For tonight, however, albums and rumors and fiancée aside, Cardi is focused on giving her fans (affectionately known as “the Bardi Gang”) a good time. Dressed in a sumptuous red, black, and white fur, a cigarette holder dangling from her lips and a sharp black and white wig on her head, Cardi is basically the most glamorous Cruella De Vil to come out of the Bronx — or, as she calls herself, Bruella De Vil.

Before heading to the stage, where she’ll perform her songs “Lick,” “No Limit,” and of course, the ubiquitous “Bodak Yellow,” Cardi reflects thoughtfully on how far she’s come since Love & Hip Hop, her days as a dancer, even her time working at a grocery store in Tribeca while going to college.

“I used to worry a lot. I still worry a lot, but not about the things that I used to worry about because my younger self, I didn’t regret anything that I ever did…I was happy and I was free and I was living it up. I don’t regret that, because you know people, they try to make you feel like it was wrong that I used to show my boobs or like freaking walk around naked or strip and people would try to make me feel like I was wrong for doing that and then for a second, I would be like, ‘Why did I did that?’ And then I was like, ‘F-ck that!’ Because I had a good time.”

Almost as though to herself, before being whisked away by her management, she adds: “I don’t feel free now.” 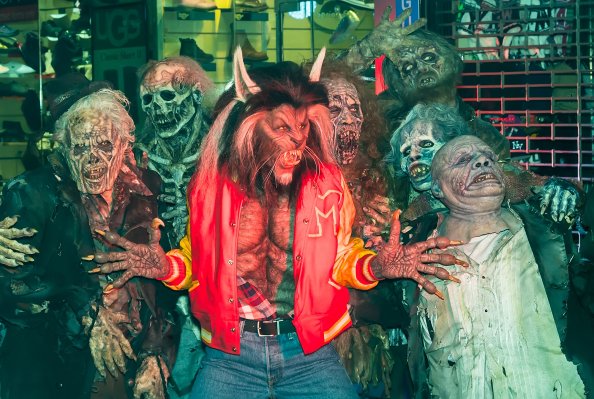 See All the Best Celebrity Costumes from Heidi Klum's 2017 Halloween Party
Next Up: Editor's Pick