“This year is going to be super spooky for Donald Trump,” The Late Show With Stephen Colbert host said. “I know it’s almost Halloween, but it really feels more like Christmas.”

Colbert then riffed on some favorite holiday carols, like singing “Paul Manafort, Paul Manafort/You’re just the first of many” to the tune of “O Tannenbaum” and declaring “5 years in jail!” as a part of the chorus to “The Twelve Days of Christmas.”

“Manafort’s been charged with 12 counts, including conspiracy to launder money, tax fraud and conspiracy against the United States,” he said. “What’s that crime usually called again? I can’t remember, for some treason.” 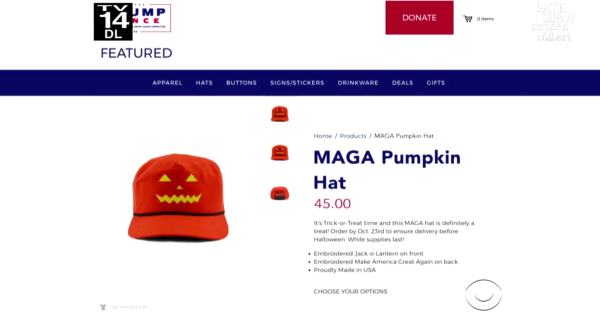 Stephen Colbert Made Trump's Halloween Merch Much Scarier
Next Up: Editor's Pick