For the past three years, Apple’s iPhones haven’t changed much. Or, at least they didn’t appear to on the outside: the iPhone 6, iPhone 6s, and iPhone 7 all maintained the same slim, aluminum-crafted design with a circular home button at the bottom. Each phone came in the same size options: a 4.7-inch standard model or a larger 5.5-inch version.

That’s finally changing with the iPhone X. The new iPhone, which starts at $999 and begins shipping on Nov. 3, represents the most significant design change Apple has made to the iPhone in years. Apple’s new flagship now has a 5.8-inch edge-to-edge screen that’s more vibrant than ever. Just above the display is a suite of new sensors and a depth-sensing camera that for, the first time, allows owners to unlock their phone just by looking at it.

Some of these capabilities may sound familiar, and rightfully so. Several newer Samsung phones already support facial recognition. And phones made by Samsung and others also include impressive displays that are nearly borderless. But part of the reason the iPhone X’s updates feel so radical is because they change the overall iPhone experience. Minor but crucial actions like navigating back to the home screen and closing apps are no longer consistent across all of Apple’s phones. After spending nearly a day with the iPhone X, here’s a closer look at what it’s been like to use it:

An iPhone that’s all screen

The iPhone X’s display isn’t just larger than that of the iPhone 8 Plus and Apple’s older phones: it’s markedly improved. This is the first Apple smartphone to use OLED technology rather than LCD, and it has a stunning 2,436 x 1,125 resolution display that supports HDR. That means the iPhone X’s screen packs 458 pixels per inch—more than any other iPhone. For me, HDR made the most meaningful improvement. Colors looked deeper and richer on the iPhone X versus the iPhone 8 Plus when viewing HDR-optimized content in Netflix.

But I did occasionally notice enhancements elsewhere too. For example, app icons on the iPhone X popped more evidently than those on the iPhone 8 Plus’ LCD screen. The display on Samsung’s Galaxy S8+ is tough to beat, but I’d say about on par with that of the iPhone X, except for one noticeable difference. The Galaxy S8+’s screen has more of a blueish hue to it, and that’s likely because the iPhone X includes Apple’s TrueTone technology, which is also present on the iPhone 8 and 8 Plus.

Read more: Want Apple’s iPhone X Before It Sells Out? Here’s What You Should Do

The most jarring difference the iPhone X’s bigger screen brings is the removal of the home button. Apple’s Touch ID-enabled home button has been at the center of iOS for years, functioning as a means of returning to the home screen, authenticating payments, launching Siri, and viewing the apps you currently have open. Getting rid of it means that core tasks like these need to be completely reimagined, which is exactly what Apple has done. Exiting an app to get back to the home screen now involves swiping up from the bottom of the screen. To access the Control Center, you must swipe down from the top right corner of the screen instead of up from the bottom. Viewing notifications requires a swipe down from the left corner of the screen. And the app switcher carousel can be triggered by swiping up from the bottom and pausing for a moment.

These gestures don’t take long to master, but shaking old habits certainly does. I found myself constantly reaching for a home button or swiping up from the bottom expecting to see the Control Center.

Unlocking your iPhone by looking at it

When Apple unveiled the iPhone X, I had a hard time understanding why a bigger screen and the ability to unlock your phone with your face would justify a $999 phone. But after spending roughly a day using it, I’m impressed with the clever ways Apple incorporated Face ID into iOS. Among the most useful features is the iPhone X’s ability to hide notifications on the lock screen until it knows you’re looking at the phone. If you receive a text, for instance, the iPhone X won’t show the actual content of the message until it detects your face. This also means, by the way, that a child or partner can’t surreptitiously read your texts on a lock screen…

Similarly, the iPhone X can dim your screen when it knows you’re not looking at it. Samsung has experimented in the past with similar features. It’s Galaxy S4 smartphone, for example, made it possible to scroll with your eyes without touching the phone’s screen. But that capability felt half-baked and didn’t offer much convenience, whereas the iPhone X’s is more polished and useful.

My biggest complaint about the facial recognition on other phones is that they’re not always accurate or quick. Based on my short time with the iPhone X, Apple’s new smartphone doesn’t seem to have that problem. Face ID recognized me quickly whether I was in a brightly lit office, in a completely dark room, or wearing sunglasses. That wasn’t so with Samsung’s Galaxy S8+, which couldn’t verify my face in the dark or while I wore shades. In normal instances, however, the Galaxy S8+ worked quickly and brought me right to the home screen when it detected my face. That’s one characteristic I appreciate over Face ID: Once the iPhone X recognizes your face, you still have to swipe up to get past the lock screen, which feels like an unnecessary extra step. Samsung’s phone also has a fingerprint reader on the back as an alternate means of authentication unlike the iPhone X.

Read more: Review: Google’s Pixel 2 XL Is the Best Android Phone for Anyone Tired of Samsung

A camera that senses depth

Apple’s depth-sensing camera can be used for more than just unlocking your phone and authenticating payments through Apple Pay. It’s also used for a new iMessage feature called Animoji, which essentially maps your facial expressions to a 3D emoji. A far more useful and enjoyable use of the front-facing depth camera, in my opinion, is the ability to take Portrait Mode selfies. This means you can snap photos with the front-facing camera that will have a blurred background in order to make the subject pop. Take a look at the sample shot below.

Ultimately, I don’t think capturing more sophisticated selfies or unlocking your phone with a quick glance will be what makes the iPhone X appealing to most people. Customers who drop around $1,000 on a new iPhone have been waiting for a larger-screened Apple smartphone that doesn’t feel overwhelmingly large to hold. The iPhone X certainly solves that problem, although the buying decision comes down to a lot more than design and comfort. Camera quality and battery life are equally as important, which we’ll test in our full review. 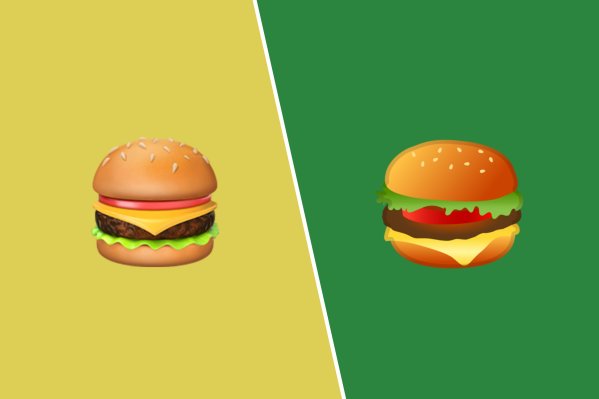 Google's CEO Just Promised to 'Drop Everything' to Fix its Cheeseburger Emoji
Next Up: Editor's Pick