Myanmar Detained a Team of Journalists for Flying a Drone

The recent arrest of two foreign journalists and two Myanmar citizens after an attempt to fly a drone over the nation’s parliament has caused alarm over what appears to be an ever-tightening grip on the media.

All four have been charged under an export and import law, though Myanmar nationals Aung Naing Soe and Hla Tin did not own or operate the drone, according to their lawyer, Khin Maung Zaw.

“It may be ridiculous, but it’s what happens here,” Zaw told TIME, adding that all four are being detained on a 15-day remand while they await a trial. Khin Maung Zaw said no family, friends or legal counselors have been allowed to meet with the detainees since their arrest on Friday.

Aung Naing Soe, the local interpreter, is well known in the country for his reporting and photojournalism, which often focuses on domestically controversial topics such as the persecution of Myanmar’s Muslim Rohingya minority. He has previously endured death threats as a result of his work and faced new harassment this weekend when a local media outlet dubiously claimed that he had ties with a Rohingya insurgent group.

“This is very dangerous for Aung Naing Soe,” said Ye Htoo, a family friend. He added that these “obviously false allegations” have spread on social media and could “make more trouble” for Soe and his family.

Read more: The Story Behind the Most Haunting Images of the Rohingya Crisis

The case also comes amid tensions between Myanmar and Turkey, which escalated in September after Turkish President Tayyip Erdoğan accused Myanmar of committing “genocide” against the persecuted Rohingya group. A brutal military crackdown has sent more than 604,000 Rohingya fleeing to neighboring Bangladesh since late August.

Journalists in Myanmar have also found themselves increasingly mired in legal troubles amid a backsliding of press freedom that briefly flourished when direct military rule came to an end in 2011. Earlier this year, the Committee to Protect Journalists criticized Myanmar’s de facto leader Aung San Suu Kyi for failing to reform Myanmar’s repressive media environment and continuing to arrest journalists.

Shawn Crispin, CPJ’s senior Southeast Asia representative, tells TIME the ongoing “legal harassment underscores the fast deterioration in press freedom conditions in Myanmar under a nominally elected government and harks to the bad old days of military repression of the media,” calling for the immediate and unconditional release of the four arrested Friday.

“If Myanmar is sincere about its democratic transition, then authorities must cease and stop this type of petty legal harassment and allow journalists to do their jobs without fear of reprisal,” Crispin said.

While Myanmar is still in the midst of a dramatic transition from military rule to a hybrid democracy, its new civilian government has retained a cache of antiquated laws that critics say are susceptible to abuse. In late June, three Myanmar journalists were arrested in the country’s east, where the government remains at war with ethnic minority rebel groups. The trio, who were eventually acquitted after months in detention, was accused of violating a draconian “unlawful association” law by liaising with insurgents in the course of their reporting. 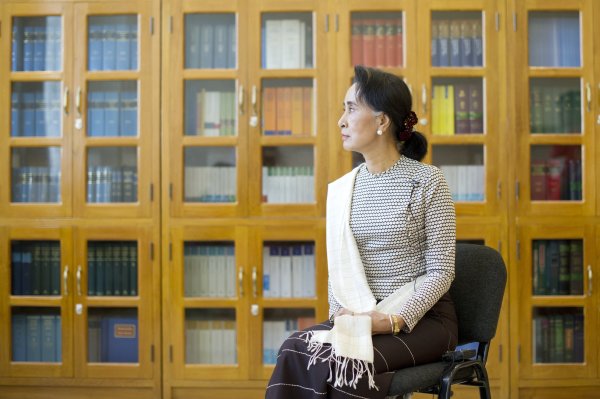