The office of George H.W. Bush said Wednesday that the former President occasionally “has patted women’s rears in what he intended to be a good-natured manner.” The statement came as a a second woman accused Bush of groping her.

“At age 93, President Bush has been confined to a wheelchair for roughly five years, so his arm falls on the lower waist of people with whom he takes pictures,” a statement from Bush’s office released minutes before the second accusation was publicized reads. “To try to put people at ease, the president routinely tells the same joke — and on occasion, he has patted women’s rears in what he intended to be a good-natured manner.

“Some have seen it as innocent; others clearly view it as inappropriate,” the statement continues. “To anyone he has offended, President Bush apologizes most sincerely.”

New York-based actress Jordana Grolnick told Deadspin that Bush groped her in August 2016 during the intermission of a play she was performing in at a Maine theater. A frequent patron of the theater, Bush came backstage with his wife, former first lady Barbara Bush, for a photo with the cast.

“We all circled around him and Barbara for a photo, and I was right next to him,” Grolnick told Deadspin. “He reached his right hand around to my behind, and as we smiled for the photo he asked the group, ‘Do you want to know who my favorite magician is?’ As I felt his hand dig into my flesh, he said, ‘David Cop-a-Feel!’” an apparent sexualized reference to famed magician David Copperfield.

Grolnick said the rest of her castmates “laughed politely and out of discomfort,” adding that Barbara Bush was nearby at the time of the incident. “[She] said something along the lines of, ‘He’s going to get himself put into jail!’ to which we laughed harder.”

The actress added that prior to the photo — which was visible in a now-deleted Instagram post — other actors had told her that H.W. Bush had a reputation for groping while posing for photos, but she dismissed them without much thought.

“I guess I was thinking, ‘He’s in a wheelchair, what harm could he do?’” Grolnick said.

Earlier on Wednesday, Bush apologized following actress Heather Lind’s accusation that he touched her from behind and told a lewd joke during an encounter four years ago.

“He didn’t shake my hand. He touched me from behind from his wheelchair with his wife Barbara Bush by his side,” Lind wrote in a now-deleted Instagram post. “He told me a dirty joke. And then, all the while being photographed, touched me again.”

Bush spokesperson Jim McGrath wrote that “President Bush would never — under any circumstance — intentionally cause anyone distress, and he most sincerely apologizes if his attempt at humor offended Ms. Lind.” 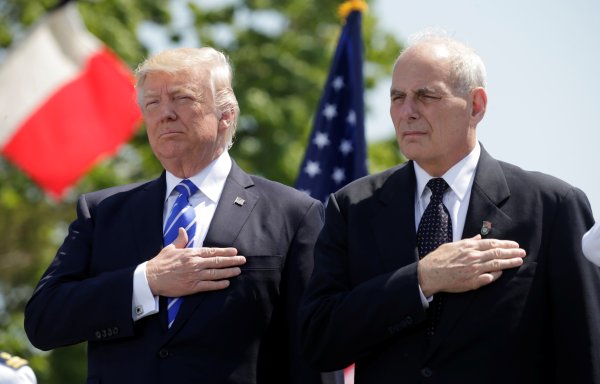 John Kelly Has a Higher Approval Rating Than President Trump
Next Up: Editor's Pick