John McCain: Jeff Flake Stood Up For What He Believed In Knowing 'There Would Be a Political Price to Pay'

Sen. John McCain praised Jeff Flake, his fellow Republican Senator from Arizona, after he announced that he would not seek re-election in the coming midterms.

“It’s been one of the great honors of my life to have the opportunity to serve with a man of integrity, and honor, and decency, and commitment to not only Arizona, but the United States of America,” McCain said of the 54-year-old senator on Tuesday.

“I have seen Jeff Flake stand up for what he believes in, knowing full well there would be a political price to pay,” McCain added.

Flake has been a vocal critic of President Donald Trump despite their shared party. Recent polls conducted by both Republican and Democratic groups in Arizona show Flake is at risk of badly losing the state’s primary next August, according to CNN.

“The notion that one should stay silent as the norms and values that keep America strong are undermined and as the alliances and agreements that ensure the stability of the entire world are routinely threatened by the level of thought that goes into 140 characters — the notion that one should say and do nothing in the face of such mercurial behavior is ahistoric and, I believe, profoundly misguided,” Flake added. 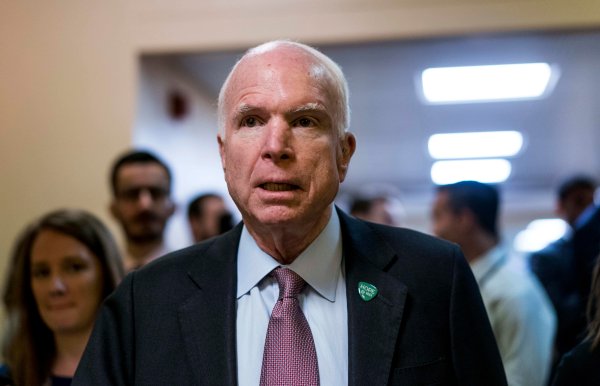 John McCain Urges Supreme Court to 'Return Control of Our Elections to the People'
Next Up: Editor's Pick