It looks like it’s time to add hype coach to Matthew McConaughey’s resume. During a Tuesday appearance at the University of Texas, the Oscar winner struck the ultimate power pose while delivering a speech to the men’s basketball team.

The moment was captured on camera and tweeted out by the team, prompting a deluge of hilarious reactions to the actor’s savage stance. “Idk what McConaughey was saying but it must’ve been fierce af,” Twitter user Flattop Filipino captioned the photo in a tweet that has since gone viral, earning over 193,000 likes and 58,000 retweets since Tuesday.

Of course, this isn’t the first time McConaughey’s alma mater hijinks have gotten a rise out of the Internet. Following Texas’ 2016 football game against TCU, a photo of him driving students home from campus in a golf cart made the online rounds. “Longhorns take care of each other, and it’s ‘safe’ to say Matthew McConaughey agrees,” the student government wrote. “Don’t forget to use SURE Walk when traveling home late at night; you never know who might pick you up!”

See some of the best reactions to McConaughey’s latest stunt below. 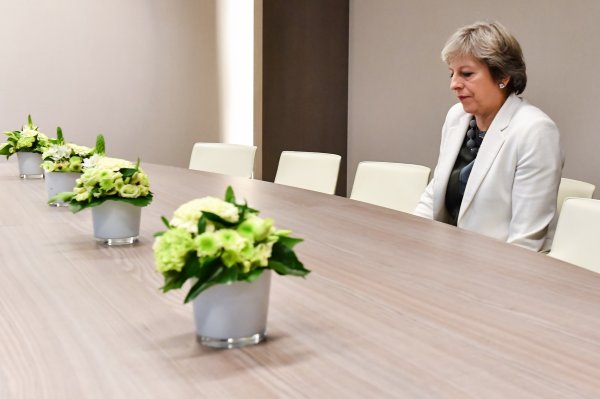 The Internet Has Jokes About This Lonely Theresa May Photo
Next Up: Editor's Pick