Meet the Woman Who Started #MeToo 10 Years Ago

Following allegations of sexual harassment and abuse against Hollywood producer Harvey Weinstein, actor Alyssa Milano called on social media users to speak up if they were survivors of sexual harassment or assault. Women across the world — including McKayla Maroney, Anna Paquin and Debra Messing — shared their experiences and #MeToo soon started trending.

But while many credited Milano with launching the movement, it was actually started a decade ago by Tarana Burke. (Milano has attributed the movement to Burke on social media.) In 2007, Burke, who is a survivor of sexual violence herself, was working as an activist in Philadelphia with young women of color who had experienced sexual violence. She was looking for a way to let them know that they weren’t alone, so she told them: “Me too.”

“Before I worked with them, I had an experience with a young person who was a survivor and I couldn’t speak to them honestly because I was still dealing with my issues. But I just knew that everything would have changed if I had been able to tell that person I was going through the same thing they were,” Burke said. “I wasn’t able to then. But I am now.”

Burke spoke to Motto about her reaction to the viral movement, how we get men involved in the conversation and her advice for fellow survivors who might be traumatized by the past week.

What was your first response when you saw the hashtag had gone viral?

I wasn’t sure what direction it was going to go in. I was concerned that it would be a moment instead of a movement. I have less concerns about it sticking now.

How did you feel when people pointed out that you were the person who started this movement after it had initially been credited to Alyssa Milano?

I was glad and happy that people had recognized my work. I was initially inundated with texts and messages from friends who told me, “Wait, I’m seeing #MeToo everywhere, but I’m not seeing your name attached to it. What’s going on?”

So it was so great that people knew my work, supported my work and wanted to make sure it was properly credited.

Some people have criticized #MeToo because it puts the onus on women — rather than men — to disclose their past traumas to make a point. What’s your response to that criticism?

I’ve been doing this work for a long time, and I use my story as a means of healing others. I did struggle at the beginning to talk about it, but at this point, I’ve been talking about it for so long. And that’s the whole point of the movement: that I emphasize and understand what other survivors are going through because I have my own story.

Women of color are so often excluded from the conversation about sexual violence. Do you feel like that their voices were amplified enough in this viral moment?

This hashtag and viral moment wasn’t centered on women of color and I don’t know if the hashtag has amplified the voices of women of color. Women of color, queer folks, differently abled folks and other marginalized communities — we always have to insert ourselves into this conversation. That’s not a new phenomenon.

And this work can’t grow unless it’s intersectional. We can’t do it alone and they can’t do it alone. Sexual violence knows no race, class or gender, but the response to sexual violence absolutely does. Until we change that, any advancement that we make in addressing this issue is going to be scarred by the fact that it wasn’t across the board.

#MeToo has pushed the pervasiveness of sexual violence to the forefront of the national conversation. What can we do to capitalize on this movement and actually make real change in how we address this issue?

Read More: ‘Me Too’ Just Gave Society a Conscience

So what should we do to address these issues in our own communities?

We have to be brave. This kind of work takes courage. I’m not trying to say it like: “Get yourself some courage and get out there.” [But] if you’re watching something like this happen, if you’re a bystander while this is happening, and you feel uncomfortable and that the situation is wrong and you need to do something, I want to encourage people to find the strength to intervene. There’s so much you can do — from writing a letter anonymously to saying, “Hey, that’s not right. You can’t do that.” People have to speak up.

How do we get men more involved in the conversation?

I don’t know that I have an answer to that. In moments like this, when we elevate the voices of women and show just how much of a problem this is, maybe men will turn to each other and say: “We need to talk about this.” I think there are a lot of women who want men to do some of this work. A lot of them want to say: “I can’t be the survivor and the supporter.” I have to figure out what healing looks like for myself, and then I have to help my perpetrator? That’s not fair. The perpetrator should be doing that work.

We should collectively be talking to children — as young as kindergarten — about what consent looks like. Men need to help reshape the conversation around consent. Men should be talking to each other to figure out what they can do to stop rape culture — that’s an area where they especially have a job to do.

This week has been empowering for a lot of women, but it’s also been really traumatizing and hard for others. What would be your message to a fellow survivor?

We are experiencing a moment of mass disclosure, which can be very triggering for folks. There are a lot of people who are turned off by this movement — and I get it. There’s not a clear message or outcome. It’s not like people are saying, “Yes, me too” and then getting a list of steps to follow to heal and make change on this issue. And that’s what I hope to provide for folks in the coming weeks and days. But in the meantime, be gentle with yourself, take your time, figure out what you need, don’t be afraid to ask for what you need, don’t let anyone shame you into feeling like what you need is dumb and don’t let anyone diminish your experience.

I want survivors to know that healing is possible. There are various entry points to this journey, and the journey is long, hard, and there are going to be times that you’re going to need to stop and take a step back. When you are a survivor of sexual violence, it permanently alters your life. So that journey to healing is a journey back to yourself — and that’s always worthwhile. 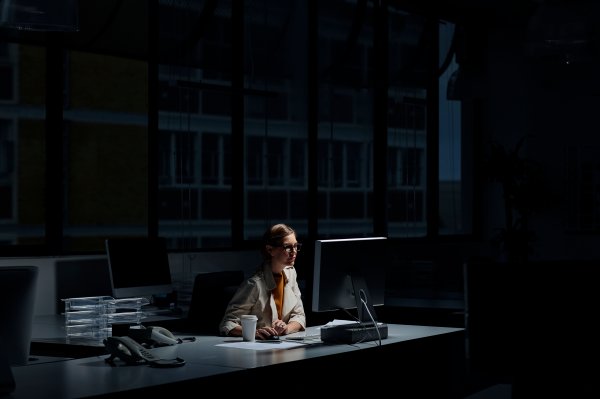 You Don't Have to Work Overtime to Impress Your Boss
Next Up: Editor's Pick