Why You Probably Shouldn't Worry About Exercising Yourself to Death

Is there such a thing as too much exercise?

A new study, published in the journal Mayo Clinic Proceedings, suggests that there is. Fitness diehards may have a higher-than-average risk of coronary artery calcification (CAC): a buildup of calcium in the artery walls of the heart that makes arteries less flexible and is often a harbinger of heart disease. But the vast majority of people, experts say, don’t need to worry about overdoing it.

A team of researchers, led by scientists from the University of Illinois and Kaiser Permanente, tracked the exercise habits of more than 3,000 people over 25 years. People were split into three groups based on whether they met the national physical activity guidelines (which call for 150 minutes of exercise per week), failed to reach them or exceeded them.

Surprisingly, compared to people who exercised moderately, those who hit the gym for longer than 7.5 hours per week—three times more than guidelines call for—had a 27% higher risk of developing CAC by middle age. White men in that category were particularly at risk; they had an 86% higher chance of CAC. About 40% of people who exercised the most developed any amount of calcification after 25 years.

The results may seem like a reason to eschew your evening workout. But exercise is generally good—not bad—for the heart, and people typically need more of it—not less.

“This [study] doesn’t apply to 99% of people,” says Dr. Deepak Bhatt, executive director of interventional cardiovascular services at Brigham and Women’s Hospital in Boston. “Most people are not getting into this range of exercise. The problem in the U.S. is the exact opposite, that most people are getting nowhere near the recommended amount of exercise.”

Even if hardcore exercisers do have more calcium buildup, it’s still not clear if that’s damaging the heart, says Dr. Aaron Baggish, director of the cardiovascular performance program at Massachusetts General Hospital. While the results are intriguing, the study doesn’t actually show that people with a heightened risk of CAC went on to have heart attacks or other health problems, Baggish says, and that means it’s too soon to say whether extreme exercise is actually causing heart issues.

While doctors know that calcium buildup in the hearts of sedentary people is a bad sign, Baggish says it’s not clear whether that’s true of very active people, too. The body deploys calcium to repair injuries and inflammation, so marathon runners, endurance athletes and other regular exercisers may accumulate calcium as the body recovers from stress, he says—but that doesn’t necessarily mean it’s causing problems.

“Think about arthritis in your knee,” Baggish says. “If you are active, fit and healthy, you are much more likely to have good knee function later in life than if you sit around and you’re overweight and unhealthy. You may actually have just as much calcium in that knee as someone who’s sitting around on the couch, but the function is better, your knee lasts longer and you feel better.” The same, he says, may be true of the heart.

Still, Bhatt says heart calcification in general is not ideal, and adds that past research has shown a link between excessive exercise and heart strain. “Everything is best in moderation,” Bhatt says. “Extreme exertion, especially over time, isn’t good for the heart,” and moderate exercise is probably the best path to good cardiovascular health. 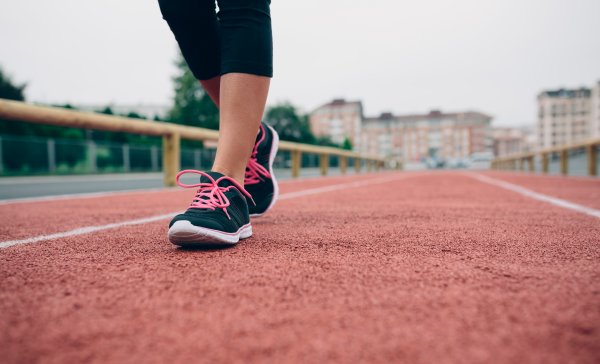 Doing This for 30 Minutes a Day Can Help You Live Longer
Next Up: Editor's Pick