An American Just Won the U.K.'s Booker Prize for the Second Year in a Row. Not Everyone Is Happy About It

George Saunders won the Man Booker Prize on Tuesday for his novel Lincoln in the Bardo, becoming the second American in a row to receive the coveted annual award. And though Saunders is well liked, even beloved, in literary circles, not everyone is thrilled about the news.

Until 2013, the Booker was open only to authors from the Commonwealth, Zimbabwe and the Republic of Ireland. This made it a valuable platform to elevate the careers of British writers (Kazuo Ishiguro, Ian McEwan), as well as those from countries that are often underrepresented in global literature (India’s Arundhati Roy, South Africa’s Nadine Gordimer).

Four years ago, the prize was opened up to any author writing in English and published in the U.K. Although the broadening gives more writers a chance to win the prize, critics say that expanding the award to American writers simply reinforces the careers of authors who already have high visibility and closes off opportunities to those who struggle to reach an audience.

“Without the Booker thrusting the novels of AS Byatt, Julian Barnes, Ian McEwan and Kazuo Ishiguro into the hands of middle England and readers abroad, their careers and bank balances would have been very different,” wrote British author Tibor Fischer in an op-ed for the Guardian published before the winner was announced (but after the shortlist was known to be half American). “I like competition. But shouldn’t there be a level playing field? British writers aren’t eligible for the big American awards … the presence of the Americans is simply making it harder for British talent to flourish or even survive (not to mention the writers from the Commonwealth). If the Man Booker cares about British literary fiction, maybe it should have a rethink. Otherwise the next Kazuo Ishiguro might not make it through.” The criticism is particularly poignant given that Ishiguro became the latest Nobel laureate in literature earlier this month.

Fischer is far from alone in his criticism. Byatt said in 2013 that expanding the pool would limit the “thoroughness” that the prize once had. Last year, Barnes called the move “daft,” noting, “The Americans have got enough prizes of their own. The idea of [the Booker] being Britain, Ireland, the old Commonwealth countries and new voices in English from around the world gave it a particular character and meant it could bring on writers. If you also include Americans — and get a couple of heavy hitters — then the unknown Canadian novelist hasn’t got a chance.” After the news of Saunders’ win broke on Tuesday, some took to Twitter to voice their complaints:

The change may have been driven by financial concerns. In the New Republic in September, Alex Shephard wrote that broadening the pool of contenders makes a literary award more attractive to sponsors. The investment business Man Group sponsors the award, which gives winners £50,000 (plus £2,500 to each of the shortlisted writers).

The shift naturally hurts lesser-known writers from the U.K. and the Commonwealth (as well as independent publishing houses in those regions), but some say it also hurts readers. In September, Washington Post books editor Ron Charles wrote, “As Americans, we should be more concerned about the loss of cultural diversity, about the closure of yet another avenue for us to experience something beyond our own ever-expanding borders. It’s no criticism to say that this year’s finalists by [Paul] Auster, [Emily] Fridlund and Saunders are all distinctly American novels. But for any serious reader of fiction in this country, the Americanization of the Booker Prize is a lost opportunity to learn about great books that haven’t already been widely heralded.” 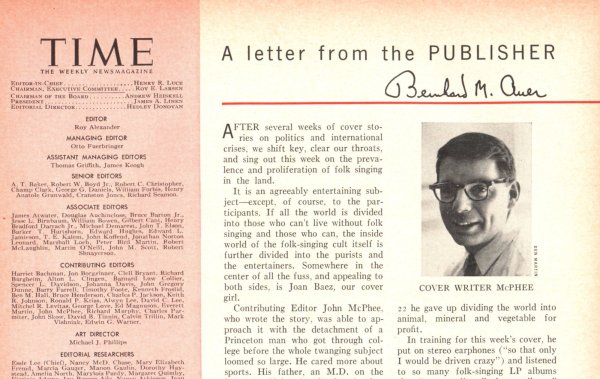 John McPhee on Writing, Reading and How Working in Magazines Has Changed
Next Up: Editor's Pick