Hate Crimes Soared in Parts of the U.K. After Brexit

Hate crime offenses in England and Wales rose to the highest point yet recorded in the year leading up to March 2017, according to official figures released on Tuesday by the government.

There was a 29% spike in recorded hate crimes— which include any crime motivated by religion, race, sexuality, disability or transgender identity— in the 12 months before March 2017 (80,393 offenses) compared to the same period between 2015-16 (62,518 offenses)

The vote to leave the E.U. in 2016 and better recording methods attributed to the rise, the government said. “The increase over the last year is thought to reflect both a genuine rise in hate crime around the time of the E.U. referendum” Britain’s Home Office, or interior department, said in a statement.

Anecdotal accounts flooded social media of attacks on some European communities in the country following the vote to leave the E.U. in June, which Leave campaign critics attribute to a rise in xenophobic rhetoric during and after Brexit campaign.

Hate crimes are still under-reported especially when the crime is committed online, Assistant Chief Constable Mark Hamilton, the the National Police Chiefs’ Council (NPCC) lead for hate crime, said in a statement. “I will be working alongside the Government to strengthen our nationally co-ordinated response to hate crime” he said.

The majority of offenses recorded during the period were motivated by race. The report notes that there was a spike in the number of racially or religiously aggravated offenses after the Westminster Bridge terrorist attack in March, when a man killed 5 people after driving a car into pedestrians and stabbing a police officer.

Provisional figures provided by the police showed jihadist attacks over the summer led to a four-month sustained increase in hate crimes, starting with Westminster attack followed by the Manchester Arena bombing and London Bridge attack on June 3. The level of hate crime offences decreased in the following days and the pattern repeated itself after the Finsbury Park attack in June 19— when a van ploughed into worshippers near Finsbury Park mosque.

Disability and transgender hate crimes saw the largest increases 2016-17, with a 53% and 45% increase respectively compared to the year before, but the Home Office said these spikes were driven by improved identification and recording of offenses, as opposed to a dramatic increase in attacks.

Despite the rise in offenses, prosecutions for hate crimes actually declined in the year to 2016/2017, from 15,442 to 14,480 people. “The drop in referrals recorded last year has impacted on the number of completed prosecutions in 2016/17 and we are working with the police at a local and national level to understand the reasons for the overall fall in referrals in the past two years” Alison Saunders, the director of public prosecutions, said in a statement.

“Police have improved the reporting procedures across forces, but we can do better at securing convictions – we need anyone who has been a victim of hate crime to report the abuse and the abuser to police to make sure these offenders are brought to justice” Hamilton said in a statement. 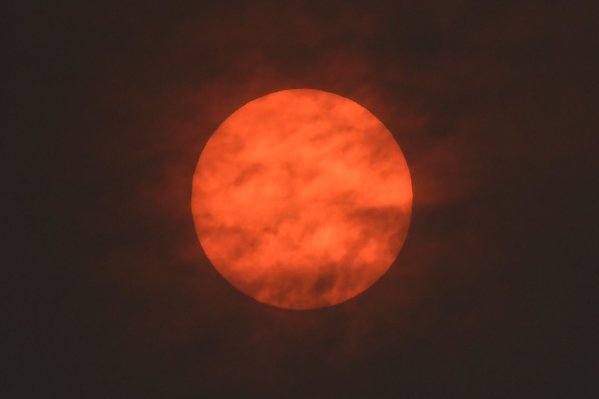 The Skies Over the U.K. Turned Red Today. Here's Why
Next Up: Editor's Pick