Mud and Hunger: Among the Desperate Rohingya Still Pouring into Bangladesh

The sounds on the shore are deafening. Thousands of refugees call out for their relatives in the darkness, wading through mud to find a familiar face by the dim light of a solar-powered torch. When they have done shouting, they sit or stand on the sodden banks of a tributary of the Naf River, where they spend the night waiting for the Bangladeshi border guards to find some better place to put them.

These are the newest Rohingya refugees to arrive in Bangladesh, joining more than half a million others who have fled over the past six weeks. The unprecedented exodus began after Aug. 25, when Rohingya insurgents attacked dozens of state security outposts, triggering a brutal army crackdown characterized by murder, rape, and the torching of villages and homes.

“My story is the same as everyone’s,” says Abu, 86, seated on the edge of a paddy field. He said he left his village 12 days ago when soldiers came in with guns and started firing. “They were killing people and burning our houses, so we left and kept walking.”

But Bangladeshi officials say many of the new arrivals fled because they’re now starving in Myanmar’s Northern Rakhine state, where aid has been almost completely cut off since late August. Bangladesh is already host to about a million Rohingya, and the authorities fear that all of those remaining in Myanmar will eventually try to make it to the camps along the border, where they receive food, shelter and medical care.

Read more: The Story Behind the Most Haunting Images of the Rohingya Exodus

“They’re trying to come here because they’re hungry, they need food and medicine,” says Lt. Commander Zafar Imam of the Bangladesh Coast Guard. On Monday, he tells TIME, at least 12 died — four of them small children — when a boat capsized near the island of Shahdpori Dwip. Such tragedies happen about once or twice a week, he adds.

The United Nations, which has likened the recent military operations to ethnic cleansing, says the Myanmar military is preventing those who fled from returning home. Humanitarian workers based in Cox’s Bazar say the flood of refugees has slowed to a trickle, but on a given day between 150 and 2,000 still arrive. At the height of the crisis, thousands turned up apparently wounded by gunshots and landmines, with women bearing signs of sexual trauma. Fewer come with injuries these days, but all are desperate.

Those who reached Anjumanpara village, in the district of Palongkhali, on Monday found little immediate relief. They spent their first night lying on the mud as tropical rains poured down on them and their belongings. Medics attended to the most desperate — many are severely dehydrated, and at least one heavily pregnant. The rest were left to the elements.

—With reporting by Helen Regan/Anjumanpara 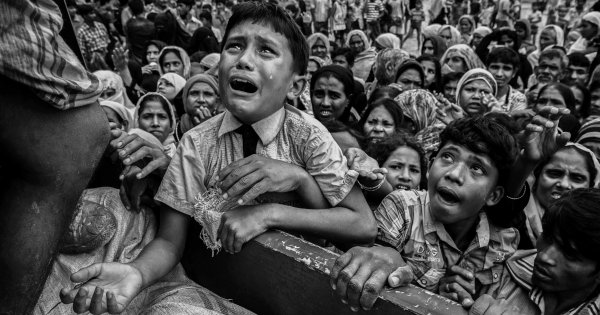 The Story Behind the Most Haunting Images of the Rohingya Exodus
Next Up: Editor's Pick