Michael Brown, the former FEMA head who was widely blamed for the Bush administration’s slow response to Hurricane Katrina, sees some familiar patterns in the aftermath of Hurricane Maria in Puerto Rico. The same breakdown in coordination between different levels of government that exacerbated the disaster of Katrina also contributed to struggles to respond adequately to Maria, Brown told TIME this week.

Brown, who resigned as FEMA director under President George W. Bush amid criticism of his handling of Katrina, praised the Trump administration’s overall response to Maria. But he said that the unified command center in Puerto Rico was ineffective at coordinating and managing resources, as some local officials would not or could not make it there because they were isolated by the storm’s damage to the island’s infrastructure. In the immediate aftermath of Katrina, New Orleans lacked a federal command center on the scene altogether, according to a government report commissioned to assess the event.

“I think presidents and certainly FEMA have learned that you got to have a unified command structure to respond to any disaster,” Brown said. “In Puerto Rico, we see that there are many people who haven’t learned that.”

David Paulison, who succeeded Brown as FEMA leader under Bush, offered a similar assessment. “What we had in Katrina was a disconnect between the federal, state and local level,” he said. “In Puerto Rico I see that same breakdown.”

Those assessments were challenged by a senior FEMA official in Puerto Rico. “I know both Mike and Dave and I have a lot of high regard for them, but that’s just not the case on the ground here,” Mike Byrne, the federal coordinating officer for Puerto Rico, said in a phone interview from San Juan. Byrne said he meets daily with Puerto Rico’s governor at the command center established early on in San Juan and several times a day with his staff, and has an inter-governmental coordinator in each of the island’s 78 municipalities. “I not only have ground troops at the most minute level, I also have constant access to the highest levels,” he said.

Byrne, who took over for another FEMA official a week ago, acknowledged that Puerto Rico’s physical isolation and the comprehensive damage of the storm — which knocked out power and cell phones, and many roads — slowed the initial response. But with 77 helicopters and 19,000 troops on the island three weeks after the storm, the relief effort was “robust,” Byrne said, delivering one million liters of water on Oct. 17, and 600,000 meals. “So there’s always slow ramp up time, but once you get the pump primed, things get moving. And it took longer to get this pump primed, because it’s 1,000 miles from the mainland.”

Despite these efforts, Puerto Rico remains in dire straits, with much of the island without electricity or access to clean drinking water nearly a month since the storm struck the U.S. territory, leaving at least 48 people dead. Still, many natural disaster experts agree with Byrne that delays in response have been due to the island’s location and lack of infrastructure, rather than issues with the federal government’s response. Brown said the Trump administration’s response in Puerto Rico was “pretty much textbook.” James Lee Witt, who served as FEMA director for the entirety of the Clinton presidency, told the Washington Post he would give the Trump administration an “A-plus” for its handling of the storm — something Trump picked up on in remarks this week.

“I was very honored,” Trump said Monday. “He’s the FEMA director of the Clinton administration. Gave us an A-plus for how we responded to the hurricane aftermath.”

Perceptions of the response have also been affected by President Trump’s social media habits. While Trump put resources at FEMA’s disposal, he distracted from recovery efforts at times with tone-deaf comments and online feuds with some local officials, including San Juan Mayor Carmen Yulín Cruz. Last week, Trump threatened to pull FEMA and the Department of Defense from the island. Trump’s advisers would prefer not to focus on the President’s Twitter feed. “Judge us by the actions,” Mick Mulvaeny, Trump’s director of the Office of Management and Budget, told CNN earlier this month. “Judge us by what’s happening on the island.”

-With reporting by Karl Vick 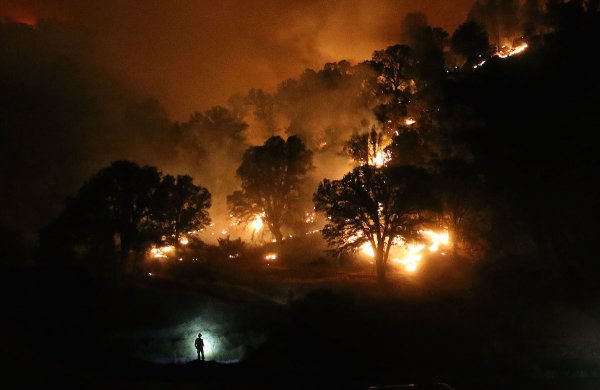 How California Changed the Way the World Fights Fires
Next Up: Editor's Pick