In a one-two punch, President Trump is taking his most significant steps yet to undermine the legacy of his predecessor. On Thursday, Trump took steps to weaken the Affordable Care Act after he and his party failed repeatedly this year to repeal the law. And on Friday, Trump will announce that he is decertifying the Iran nuclear accord. The Thursday healthcare moves saw Trump signing an executive order to allow the sale of cheaper, less robust healthcare plans with fewer consumer protections. Hours later, Trump’s administration announced it would no longer make cost-sharing reduction payments to insurers, a vital part of the healthcare law that has faced legal challenge on a technicality. That move would see premiums rise for those on the individual market, affecting those whose incomes don’t allow them access to tax credits — potentially sending the individual marketplace into a tailspin.

Trump’s Iran move will not amount to a complete withdrawal from the agreement, which top national security officials have said has proven to be vital to national security. Instead, Trump will take what is effectively a symbolic stand against Iran’s role in fomenting regional instability, as his administration will lobby Congress against reimposing sanctions that would completely undermine the nuclear accord. The new path forward, the White House says, will see an increase in pressure against Iran’s destabilizing actions separate from its halted nuclear program.

Both cases share a common thread, as Trump is caught between his campaign promises and more complex political and policy realities. Faced with those challenges, Trump is kicking the can to Congress to decide what actions to take.

Kelly insists he’s sticking around. The storm over the NOAA pick. And Kushner’s security form omissions.

Trump to End Key ACA Subsidies, a Move That Will Threaten the Law’s Marketplaces
Trump calls on Democrats to negotiate on replacement as he hastens law’s failure [Washington Post]

President Trump Could Decertify the Iran Nuclear Deal.
That Could Massively Backfire [TIME]

President Trump Is Chipping Away at Obamacare.
Here’s What He’s Doing [TIME]

“I would just offer to you that although I read it all the time pretty consistently, I’m not quitting today. I don’t believe — and I just talked to the President — I don’t think I’m being fired today. And I’m not so frustrated in this job that I’m thinking of leaving.” — Chief of Staff John Kelly to reporters Thursday

“I’m a reasonable guy, but when I read in the morning — I read the — well, I won’t tell you what I read — but when I watch TV in the morning, it is astounding to me how much is misreported. I will give you the benefit of the doubt that you are operating off of contacts, leaks, whatever you call them. But I would just offer to you the advice: I would say maybe develop some better sources. Some person that works way down inside an office, or — well, just develop some better sources.” — Kelly to reporters

Charity once led by Roy Moore has listed its headquarters for sale, a move that could bring him $540,000 windfall [Washington Post]

Sen. Susan Collins Announces She Will Not Run for Governor of Maine [Associated Press] 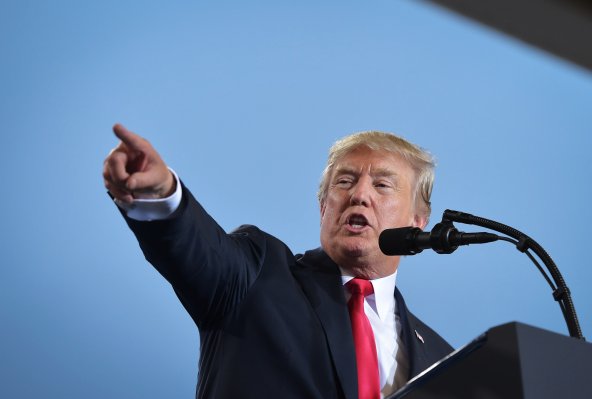 Live: Trump Speaks to Conservatives
Next Up: Editor's Pick