President Trump defended what he described as America’s spiritual bedrock in an impassioned speech to conservative voters in Washington on Friday, pledging to “stop all attacks on our Judeo-Christian values.”

Trump was the first sitting president to address the Values Voter Summit, a yearly symposium of socially conservative leaders and voters who aim “to preserve the bedrock values of traditional marriage, religious liberty, sanctity of life, and limited government that make our nation strong.”

The ballroom at the Omni Shoreham Hotel in northwest Washington was crowded and raucous during his remarks on Friday, which spanned half an hour and drew repeated standing ovations from the crowd. The speech was characteristic of Trump, who oscillated between the matter at hand — conservative principles — and boasting of his political record since taking office, referring to the growth of U.S. manufacturing and the success of federal disaster management in regions devastated by hurricanes.

But his oration reached a peak when he addressed the challenges he said plague America’s Christian conservatives, who made up the majority of Friday’s audience.

“We don’t worship government, we worship God,” Trump said, to loud cheers. “Our founders invoked our creator four times in the Declaration of Independence. And how times have changed. But you know what? Now they’re changing back again.”

He said that conservative Christian America would enjoy a renaissance with him in the White House.

“We are stopping all our attacks on Judeo-Christian values,” Trump said. “We don’t use the word Christmas because it’s not politically correct. You’ll go to department stores and they say ‘Happy New Year’ instead.

Under his presidency, Trump promised, “we’re saying Merry Christmas again! Our values will endure. Our nation will thrive. Our citizens will flourish, and our freedom will triumph.”

Trump also briefly mentioned the unfolding crisis in Puerto Rico, which was severely hit by Hurricane Maria three weeks ago.

“We’re gonna be there. It’s not a question of choice. We love those people,” Trump said. “When America is unified, no force can break us apart. We love our families, we love our neighbors, we love our country.”

For the audience at the Values Voter Summit, which numbered in the thousands, Trump’s speech was the climax of an already raucous assembly of high-profile conservatives. The roster of scheduled speakers includes current and former members of Trump’s inner circle — Kellyanne Conway, Steve Bannon, Sebastian Gorka — and right-wing pundits such as Laura Ingraham and Todd Starnes. 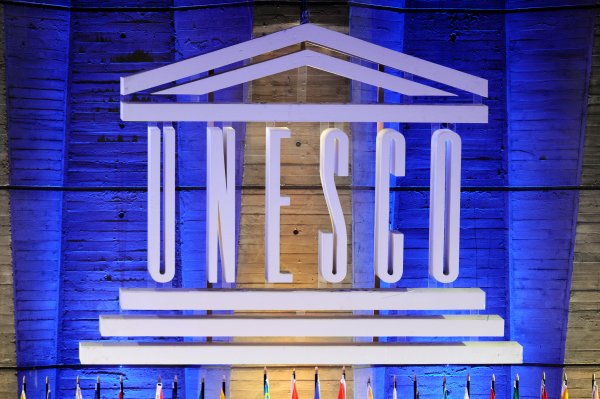 The U.S. Is Quitting UNESCO. Here's Why.
Next Up: Editor's Pick