50 Years Ago This Week: Reagan vs. Rockefeller

As the presidential election year neared, TIME took stock in this week’s cover story of the crowded Republican field. With a handful of viable candidates for both President and Vice-President — Richard Nixon, George Romney, Nelson Rockefeller, Ronald Reagan and others included — the party was looking at a strong possibility of a brokered convention.

So who would come out on top? The magazine devoted the cover to Rockefeller and Romney, noting that — though the former might alienate some of the party’s hard-line conservatives and the latter could displease voters on the other side — a recent poll had shown that a ticket that included both of them could beat the incumbent LBJ at 57% to 43%.

The idea that LBJ would lose in a head-to-head contest was not so surprising. Surveys showed that, as the nation grew ever more worried about and weary of Vietnam, approval of his time in office was at a personal low. And yet, the magazine noted, “Short of death or disablement, about the only thing that could keep Johnson from renomination in Chicago would be a Trumanesque decision to retire.”

As for Nixon, though his run of electoral losses in that decade had given him a bad rep, the magazine (rightly, it would turn out) put its chips on him:

Day in court: More than three years after a trio of civil-rights workers were killed during their efforts to register voters during Freedom Summer in Mississippi, a trial was finally taking place. However, as the state of Mississippi had declined to pursue murder charges, the case was confined to a federal charge of “conspiracy to deprive the slain men of their constitutional rights,” the maximum prison sentence for which was ten years. In 2014, the three victims — James Chaney, Andrew Goodman and Michael Schwerner — received posthumous Presidential Medals of Freedom.

Che: By the time Che Guevara was executed, he was already a legend. Read more about TIME’s coverage of his death here.

Creative solutions: Faced with the introduction of the “Breathalyser” and a lower blood-alcohol legal limit for driving, some Brits — worried that their pub-centric culture would take a hit from the change — had come up with a workaround. “In some places, those who own horses created yet another choice by riding them to the pubs and home again,” the world news section reported.

Proto-MOOCs: As college enrollment climbed and video technology advanced, American universities were also getting creative, the education section reported, by taping lectures to show to students later. One problem with this idea, a prototype of today’s online classes and Massive Open Online Courses, was that different schools used different taping technology, so they were hard to share. While that issue has mostly been resolved, the bigger problem is timeless: “Most have since found that students and faculty alike grow bored with so much impersonality.”

Travel stats: A fascinating insight comes via this business story about the boom in foreign tourism to the U.S., which in 1967 hit what was then a record level. “The U.S.A. is viewed less in terms of a vacation land,” noted the U.S. travel service, “than as a civilization to be observed and studied.”

Great vintage ad: Let’s just take a look at what this model is wearing, which appears to be an all-faux-fur, capri-length, collared and belted loungewear jumpsuit. 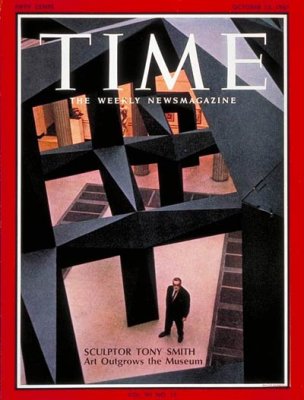 50 Years Ago This Week: The New American Art
Next Up: Editor's Pick