White nationalists once again descended on Charlottesville, Va. for a torch rally Saturday night, less than two months after the college town descended into chaos when violent clashes broke out between the group and people protesting them.

Prominent white nationalist Richard Spencer and as many as 50 others held a brief rally with tiki torches in Emancipation park that lasted between five and 10 minutes, after which they boarded the bus and left the city, CNN reports. Charlottesville authorities are discussing the possibilities of legal action in response, according to a statement from local police.

Video footage posted on social media by Spencer showed the group chanting “you will not replace us” and “Russia is our friend, the south will rise again.”

Charlottesville Police Department did not immediately respond to a request for comment from TIME.

Charlottesville Mayor Mike Signer characterized the rally as “another despicable visit by Neo-Nazi cowards” in a Twitter post. “You’re not welcome here! Go home!” he tweeted. “Meantime we’re looking at all our legal options. Stay tuned.”

“How are we ‘cowards?’ We came back,” Spencer replied on Twitter. “Also, you have no authority to ban American citizens from C’ville, doofus.”

White nationalists demonstrated twice over the summer before the “Unite the Right” rally in August that resulted in the death of 32-year-old Heather Heyer after a car plowed into a crowd of counter protesters.

Spencer said in a video posted on Twitter that “Charlottesville 3.0 was a great success.”

“We came, we triggered, we left,” he said. “It was a great success and we’re going to do it again. It was definitely a model that should be repeated.” 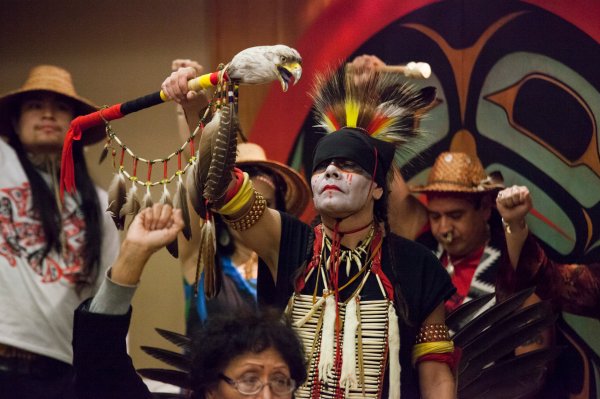 Here Are The Cities That Celebrate Indigenous Peoples' Day Instead of Columbus Day
Next Up: Editor's Pick