Ivana Trump at home in New York City on Oct. 6, 2017.
Gillian Laub for TIME
Ideas
By Ivana Trump
Trump is the author of Raising Trump

Nothing is worse than bratty, spoiled rich kids, right? You just want to rip the silver spoon right out of their mouths. Off the top of your head, you can probably think of a few adult children of the superrich who’ve thrown tantrums on airplanes, been arrested for drunk driving, made a sex tape, and wasted every advantage they’ve been given.

My three children — Donald Jr., Ivanka, and Eric — are the opposite. While campaigning for their father last year, they were praised for their intelligence, poise, dedication and coincidence. Many Americans formed their first impressions of my kids at the Republican National Convention in July 2016, where they gave speeches to support their father’s campaign. It is a humbling experience for a mother — even one who’s lived under an intense media spotlight for forty years — to watch her children excel on the world stage. Some people — including Hillary Clinton — consider the three of them to be Donald Trump’s finest accomplishments. At the town-hall-style presidential debate in October last year, a man in the audience asked the candidates to mention one thing they respected about each other. Hillary said, “I respect his children. His children are incredibly able and devoted, and I think that says a lot about Donald.”

I believe the credit for raising such great kids belongs to me. I was in charge of raising our children before our divorce, and I had sole custody of them after the split. I made the decisions about their education, activities, travel, child care, and allowances. When each one finished college, I said to my ex-husband, “Here is the finished product. Now it’s your turn.”

Donald might not have been the greatest husband to me, but he was a good father to the kids. Obviously, they adore him and are fiercely loyal to him. If he were a horrible dad, that would not be the case. If Donald wants to write a book about fatherhood, I would be happy to read it, but Raising Trump is my story, from my perspective, about what I did, and still do, for my family.

It wasn’t easy to raise three kids as a full-time working mother, even with nannies. During my fourteen-year marriage to Donald, I designed the interiors of the Grand Hyatt Hotel and Trump Tower, was president and CEO of Trump Castle (the only woman in the top position at any casino in the world that I know of), and president and CEO of the Plaza Hotel, winning the prestigious Hotelier of the Year award in 1990. I wrote three international bestsellers and made tens of millions selling House of Ivana clothes, fragrances, and jewelry on HSN Tampa, QVC London, and TSC Canada. No matter how busy I was, I had breakfast with my children every day. I sat with them at dinner every night and helped them with their homework (I loved algebra) before going out in a Versace gown to a rubber-chicken charity event. The kids and I celebrated, traveled, and grieved together. Our bond was, and is, our most valuable possession.

By all rights, as children of divorce, surrounded by wealth and forced into fame, Don Jr., Ivanka, and Eric could have become the most damaged, druggie, poor little rich kids on the planet. Instead, the boys are devoted husbands and fathers, and are jointly running a multibillion-dollar company. Ivanka is a marvelous mother and wife; founded her own apparel, jewelry, and shoes business; authored two books (her most recent one, Women Who Work, I believe, was inspired by me); is now the assistant to her father, the president of the United States; and is actively working to improve the lives of women and children. I think Ivanka played a big part in Donald’s victory. Voters looked at her and thought, I like her. I trust her. She loves her father, so he can’t be that bad. Who knows? One day, she might be the first female — and Jewish — POTUS.

I’m often asked about the secret to mothering success, and my answer is always the same: there’s no magic recipe. I told the kids, “Don’t lie, cheat, or steal. Don’t smoke, do drugs, or drink.” I was strict and demanding but always loving and affectionate. I encouraged sports and competitiveness, and enriched their lives by exposing them to different cultures and the arts. I always held them accountable for their actions and didn’t let them get away with anything. I showed them dignity, diligence, and determination by example, and gave them age-appropriate responsibilities and rules, which they followed without question—or there’d be hell to pay.

I raised them right and they turned out fabulous. It seems simple. And yet people are shocked that they’re not train wrecks or in need of intensive therapy. Assumptions made by the public are often misguided. If Saturday Night Live were accurate, Don would be stiff, serious, and humorless. But he’s actually very sensitive, wryly funny, and utterly smitten with his five children and his wife, Vanessa. They got Eric completely wrong, mistaking his niceness for naïveté. He is nice, yes, but he’s also wise, loyal, generous, open, smart, polite, a master conversationalist, and full of energy and enthusiasm. And Ivanka. Well. People think she’s all hard polish and elegance, a control freak and a little princess, but really, she’s down-to-earth, empathetic, insightful, and vulnerable at times, and she cares deeply about the people she loves and the causes she supports.

I decided to share some stories about every stage of their lives, from infancy through the present, to set the record straight about who they really are. I’m also going to share some stories about my own childhood and early life so you understand exactly who I am. The mother makes the child. I learned everything I needed to know about how to be a good parent long before I became the original Mrs. Donald Trump. If you admire my children and would like to raise accomplished, ambitious winners of your own, you’ll pick up some ideas from me on these pages—or from the kids themselves. Don, Ivanka, and Eric have contributed their own stories and insights, too, in boxes like this one:

I’m immensely proud of our mother and excited that she’s written this book. She is an amazing mom, teacher, and inspiration to all of us.

Not every daughter in the world would be so excited and proud to have her mother divulge stories about her adolescence and ex-boyfriends. But Ivanka needn’t worry. She was very good. If she did anything wrong, she knows I would have killed her.

Mom was tough. She does not put up with nonsense, and I love that about her. I think her toughness is her greatest trait. She’s also elegant, charming, and funny. Her personality spans a wide spectrum. There are a lot of people who may be charming but may not be as demanding. Our mom has a fun little devious laugh. She can tell a story and be so funny while conveying a toughness that commands respect.

What can I say? The kid gets me.

Trump is the author of Raising Trump, her new memoir.

Excerpted from RAISING TRUMP, by Ivana Trump. Published by arrangement with Gallery Books, an imprint of Simon & Schuster, Inc. Copyright © 2017 by Ivana Trump. 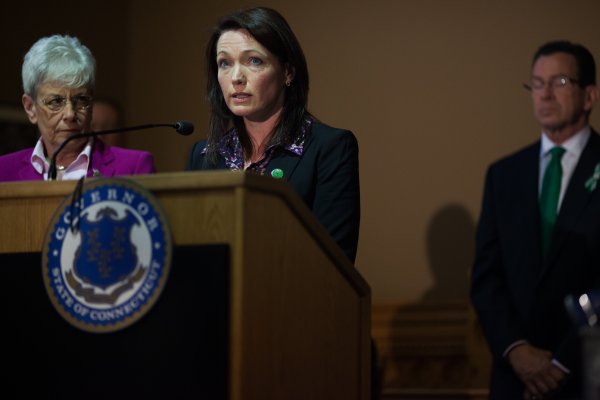 Nicole Hockley: We Need to Change the Conversation Around Guns
Next Up: Editor's Pick