6 Books You Must Read If You Love Stranger Things

Stranger Things feels so much like a Stephen King horror novel that it sent fans Googling whether the show was based on a book. It’s not — any piece of entertainment that good is usually an original — but the show’s creators, Matt and Ross Duffer, clearly pay homage to many of the horror hits of the ’80s.

The Duffer brothers have acknowledged that filmmakers like Steven Spielberg and John Carpenter loomed large in their imagination as they created Stranger Things, but so did the books of their childhood. Books by King were particularly formative, with the brothers saying they could devour one book in a night when they were growing up.

So while there isn’t a Stranger Things book, there are plenty like it. As fans gear up for Stranger Things Season 3, dropping on Netflix on July 4, here are six books to read to get inside the minds of the creators and characters.

The Stranger Things font for its title sequence is ITC Benguiat, which graced many King covers as well as the Choose Your Own Adventure series. Underground Kingdom, the 18th book in the series, came out in 1983, the same year that Stranger Things begins. It’s easy to imagine the Hawkins boys winding down after a long Dungeons and Dragons campaign with a Choose Your Own Adventure book before bed.

It, by Stephen King

You probably don’t need any extra encouragement to read It. The recent adaptation of King’s book had a terrific box office run and the paperback is still riding high on the New York Times best seller list, making it the perfect Stranger Things book for fans.

In classic King style, a group of kids band together against the common threat of a creepy clown. The parallels with the Hawkins gang are clear. In an interview with the Hollywood Reporter, the Duffer brothers said the 1986 book was the single greatest source of inspiration for the Netflix show.

King was a huge influence on Stranger Things, so it bears doubling down on his books. Like Eleven, the characters in Firestarter (1980) are telepaths whose powers derive from governmental experimentation — and also like Eleven, they’re on the run from their former overlords.

Scary Stories to Tell in the Dark, by Alvin Schwartz

The first book in this series came out in 1981, two years before the events in season one of Stranger Things. So it’s possible that Will, Mike, Dustin and Lucas would have read the collected stories about villains like a killer with a hook for a hand, a woman with a creep hiding in her backseat and other kid-appropriate (age range: 8 to 12) urban legends.

The Hellbound Heart, by Clive Barker

The 1986 novella, which served as source material for the film Hellraiser, is about trying to bring a man back to life after a gruesome death. The horrific creatures in the story were one influence on the Duffer brothers as they came up with the monster for Stranger Things, as they told Entertainment Weekly.

These books are contemporary, neither written nor set in the ’80s, but they merit a mention because the Duffer brothers worked on their TV adaptation. And their premise is not unlike that of Stranger Things: the plot involves a Secret Service agent in middle America after a car accident raises questions about the mysterious small town. 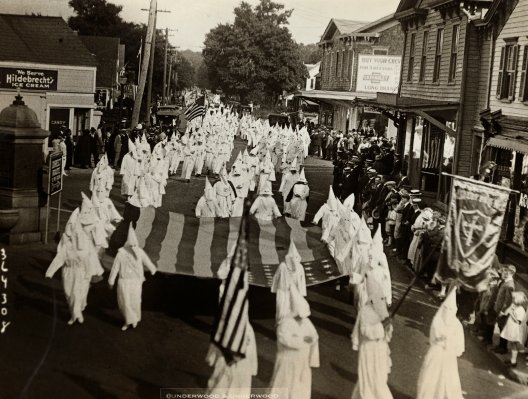 How the KKK's Influence Spread in Northern States
Next Up: Editor's Pick